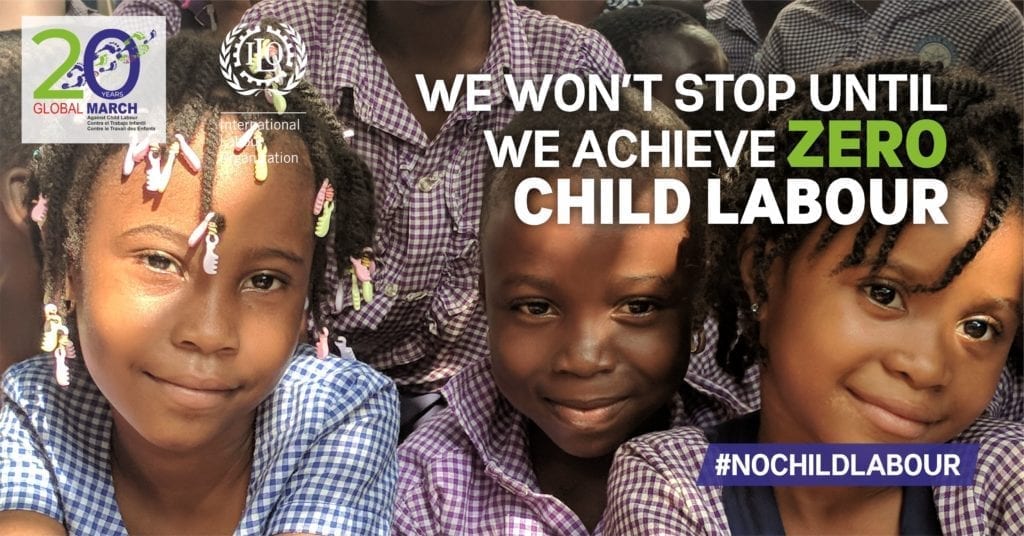 On a warm, dusty day on the Deccan plateau in April 1994, I joined Kailash Satyarthi’s Bharat Yatra, (Indian Journey), a group of 150 child labor activists part-way through its march from the southern tip of India to the heart of New Delhi, where it would arrive five months later. I didn’t realize it then, but I was witnessing the prototype of the movement that Kailash would take to a global scale four years later, and result in the biggest single step forward in history in the cause to abolish child labor.

It was hard to visualize 24 years ago that these initial attempts to mobilize masses of people behind a broad social movement would build to this moment today—a 20th anniversary commemoration at the International Labor Organization’s (ILO) annual Conference in Geneva of the Global March, which ushered in ILO Convention 182 aimed at eliminating the worst forms of child labor.

ILO conventions set a global standard for labor rights that UN member countries are expected to adopt and enforce. Not all countries are willing to do so.  But Convention 182 is now the most ratified convention in ILO history, with 181 signatory countries. As one diplomatic observer in the early 1990s said to me, looking at the burgeoning activity in India, “Kailash has built a movement—now he needs to build an organization.”

Build one he did. The Global March Against Child Labour was formed 20 years ago specifically to mobilize people worldwide to lobby for adoption of Convention 182.  And finally recognizing his decades-long campaign to abolish child labor, the Nobel Committee awarded Kailash the Peace Prize in 2014.

At the commemoration this week, attended by hundreds of delegates from governments, employers and trade unions, Kailash was joined by ILO Director General, Guy Ryder, representatives of workers’ and employers’ groups, and two very special guests: Basu Rai, a former child laborer who, as a 9-year-old, was one of the original marchers who came to Geneva 20 years ago, and Zulema Lopez, a former child farm worker in the United States, who is now earning a university student.

Opening the program, Ryder noted to Kailash, “I personally remember the moment, the incredible moment 20 years ago, when you led children from around the world into the ILC to press for Convention 182.” He pointed out that even though child labor has been reduced by tens of millions since that time, 152 million children are still working, with practically no reduction in the 5–11 year age range. Indeed, hazardous child labor for that age cohort has actually increased. With the number of children injured and killed each year in hazardous labor conditions, Ryder said, “If this were a war, we’d be talking a lot more about it.”

Basu, in an impassioned address, talked about how he was orphaned at 4, joined a street gang and became a child slave before being rescued by Kailash and his activists. “I remember coming here 20 years ago and climbing on the desks and raising the slogan, ‘No more tools for tiny hands, we want books, we want toys.’ My childhood was snatched away. I’m coming here today, but I’m still afraid. I’m still afraid—and I’m a father to a 2-month-old daughter—that the world is not safe for the children.”

Zulema told the assembly: “I was a third-generation farm worker family. I first went to work in the fields when I was 7. I missed school. It was normal for me to wake up at 5:30 in the morning, put on a T-shirt, and work for hours in the hot sun, my back aching from carrying 30 pounds of cucumbers.”

In winding up the event, Kailash reminisced, “I remember that day when I walked in with the core marchers of the Global March who were allowed to come into the ILO, which was the first time in history the ILO opened its doors to the most exploited and most vulnerable… We were marching from exploitation to education.”

While there has been progress, much work needs to be done to eliminate child labor, as envisioned by the UN-adopted Sustainable Development Goals, by 2025.

“Child labor is not an issue that will be solved by someone else; it’s up to you personally,” said Kailash. “It’s urgent. The childhood of children today can’t wait. And you have to believe it’s possible.  It’s personal, it’s urgent, it’s possible.”

Timothy Ryan is the Chairperson of the Global March Against Child Labour and the Asia Regional Director for the Solidarity Center.