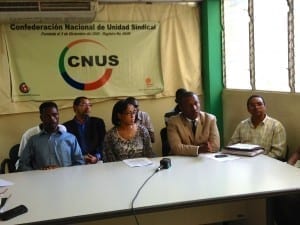 The National Confederation of Labor Unity (CNUS) and its member unions and federations called on the Dominican Republic government to respect the human and labor rights of Haitian migrant workers in the country and to put an end to human trafficking.

In a press conference this week, a dozen Dominican unionists accompanied representatives of the 84 Haitian coconut peelers who were fired last fall from Kilometer 5 Coconut Farm after seeking to form a union. After firing the workers, the plant owner closed the facility and cannot be located.

One of the workers, Francisco Ojilou, asked the Dominican government to assist in locating the owner, who left the plantation without  paying wages for the last two weeks in September.  The workers also say the owner, Rafael Emilio Alonzo Luna, did not pay them severance, which, for some workers, would cover 13 years of employment.

“We back the struggle of migrant workers affiliated with the union of coconut peelers of the Kilometer 5 of San Cristobal to demand payment of the salaries left unpaid by the company,” Mariza Vargas said at the press conference in Santo Domingo, the nation’s capital. Vargas is finance secretary of the National Federation of Workers in Free Trade Zones, Diverse Industries and Services (FEDOTRAZONAS).

Documents provided to the Ministry of Labor and the Solidarity Center by an attorney representing the fired men show that the workers signed for the days they worked—and for which they were not paid. The documents also listed the daily pay rate—which the workers say they never received.

Said Vargas: “Their employer made money from their labor for 13 years in poor conditions.  These workers say they were brought illegally, some as children, to work in inhumane conditions and no one has done anything to carry out a real investigation and bring Alonzo Luna to justice.”

A Labor Court hearing is scheduled for March 21 in San Cristobal on the severance pay issue.  The workers filed the case after the Ministry of Labor failed act, according to the unionists.  “On January 4, we submitted the complaint on trafficking.  Nothing has been done, and we are outraged,” said attorney Carlos Manuel Sanchez Diaz.  He urged the government to ensure the workers receive their unpaid wages and to take steps to halt human trafficking across the nation’s border.