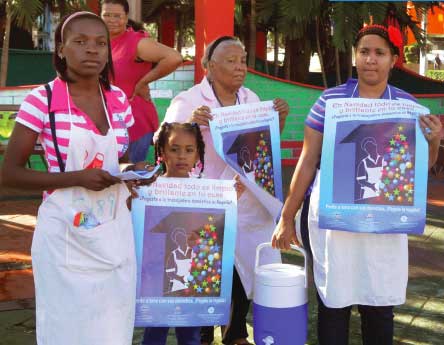 Workers this week are marking the second anniversary of the historic passage of a global standard covering the rights of domestic workers. The International Labor Organization (ILO) “Decent Work for Domestic Workers Convention (No. 189) covers written employment contracts, protection from harassment, abuse and violence, hours of work, job safety and other workplace safeguards.

As in many countries around the world, domestic workers and their supporters in the Dominican Republic are campaigning for ratification of Convention 189. When a country signs the convention, it agrees to abide by its rules. Seven nations have ratified it in the past two years, a number that illustrates the challenges domestic workers face in achieving their rights on the job. In the Dominican Republic, domestic workers’ struggle for recognition of their rights on the job has involved decades of hard work, strategic coalition building, broad public outreach and much perseverance.

In 1989, the Asociaciün de Trabajadores (Domestic Workers Association, ATH), a non-governmental organization, sought to modify the nation’s employment law to include domestic workers. Early on in that campaign, ATH reached out to numerous women’s rights group for support and built a strong coalition which engaged in widespread media outreach—through posters, leaflets, seminars, workshops and press coverage. The campaign enlisted the backing of popular television personalities who served as well-known proponents appreciated by Dominican decision-makers and the populace.

“In remunerated domestic work, which is performed mainly by women, social subordination and machista cultural stereotypes  play a major role, as does the social devaluation of domestic  work,” says Max Puig, who served as Dominican Republic Minister of Labor from 2008 to 2011.

In 2011, CNUS and a coalition of other unions and organizations helped move a bill to Congress that would provide domestic workers with social security coverage. Eulogia Familia, vice president of the 500,000-member CNUS, said getting the bill introduced involved “one-on-one interviews with key legislators to raise awareness” and meetings with government agencies responsible for shaping the legislation. Domestic workers’ participation was fundamental to these meetings, enabling legislators and policy-makers tolearn firsthand about the often daunting working conditions the women face. Further, says Familia, domestic workers could convince legislators “that they and their families are an important social group and that their vote will help elect” them. Following this outreach, the National Social Security Council issued a resolution to conduct studies on the best way to incorporate domestic workers into the social security system.

Domestic workers, energized by passage of Convention 189, are pushing hard for its ratification in the Dominican Republic—and are well positioned to do so. They are the women who leafleted, held meetings and reached out to the public for years in multiple campaigns, becoming empowered in the process.

Isolated behind the closed doors of private households, domestic workers are difficult to locate and gather in networks where they could learn their rights as working people, share experiences and gain confidence in their ability to improve workplace conditions. Outreach to this overlooked workforce by ATH and CNUS and their partners changed all that.

This report is an excerpt from the report, Dominican Republic: Domestic Workers Struggle for Rights. The report is part of Catalyst for Change, a  Solidarity Center series supported by the National Endowment for Democracy. The series features the working people, their unions and activists who are advancing worker rights and greater equity in their societies. Their experience and efforts provide real, transferable lessons for others seeking to affect positive change.