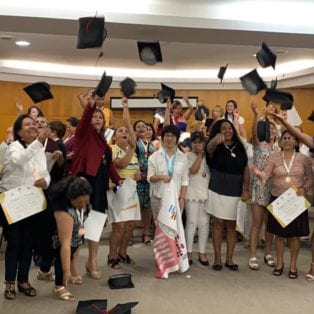 As long-time union activists helping domestic workers form unions and get a voice on the job, Andrea Del Carmen Morales Pérez and Librada Maciel found themselves fighting burnout—from stress, from nonstop work and from unrecognized trauma they carried with them for decades after the abuse they experienced cleaning homes and caring for employers’ families.

But through a unique multi-phase program focused on building leadership skills and, even more importantly, on developing strategies for healing deeply embedded trauma, both activists say they are renewed and have the tools to ensure they carry on the struggle—while taking care of their own physical and mental well-being.

The two activists are among more than 40 domestic worker leaders from 17 countries throughout Latin America and the Caribbean who took part last year in Leadership for Unity, reNewal and Amplification (LUNA), a one-year program comprised of three multiday workshops bolstered by ongoing mentoring.

“When you’re used to being a lifetime activist, you’re used to giving 120 percent of your time in the struggle,” says Morales Pérez, a leader in Nicaragua’s domestic union, FETRADOMOV. “I wanted to do everything myself. We were always just running on all cylinders.”

LUNA “has helped liberate me from the traumas I’ve held on to since I was a child,” says Morales Pérez. “The exchange we have had among all of us, leaders across the hemisphere and between leaders and grassroots organizations, and with facilitators, we have been able to work together with so much efficiency. I think I have healed and I am more ready for the challenges to come.”

Maciel had even considered leaving her work in SINTRADI, a Paraguayan domestic worker union, but after participating in LUNA, she says, “I’m invigorated. I feel like I am ready to take on the challenges.”

And, strengthened by new skills, the union leaders have gone on to win legislative victories, advance in union leadership positions and unite in campaigns with new allies.

In Bolivia, three LUNA participants went on to win election to their union’s executive committee. In Mexico, domestic workers achieved coverage by the country’s social security program as part of the recent labor law reform. In the Dominican Republic, domestic workers from multiple unions joined forces with an unprecedented level of coordination to advance legislative priorities, including the a national minimum wage commission for domestic workers that includes representatives from the government, unions and business.

“LUNA helped us a lot in pushing us over the finish line,” says Marciana Santander Martínez, a SINTRADESPY leader who also took part in the program and who started work as a domestic worker at age 15.

The minimum wage campaign began after a successful push by domestic workers for Paraguay to ratify International Labor Organization (ILO) Convention 189 on domestic worker rights, but Maciel says their experience with LUNA enabled them to carry on a difficult struggle.

The domestic workers of SINTRADI live in Itapúa, eight hours from Asunción, Paraguay’s capital—a time-consuming journey for which they sacrificed their only day off to make. “We knew we all had to be together, so we made sure on Sundays we all got to the capital to talk explain to the senators why it’s necessary we deserve the full minimum wage,” says Maciel.

“They told us, ‘You’ve never been to school, why are you here trying to change the laws?’ We would say it’s not our fault we work 12 hours a day—how are we supposed to go to school? We are doing this for our sons and daughters and our grandchildren,” she says. “We had to learn how to defend ourselves. We suffered some really ugly fights.”

Through LUNA, she says, “we learned how to center ourselves in the movement and be in our own space, to be really focused in going into our battles.”

The LUNA program involves political education, training in organizing strategies and building new models of leadership. It also applies somatics, a holistic therapy that recognizes the intricate connection between mind and body that seeks healing through understanding the psychological past. By taking part in exercises and discussions, participants learned techniques especially valuable for domestic workers and others who endure abuse, sexual harassment and other forms of gender-based violence at work, and who experience racism, homophobia and other types of societal violence and exclusion.

Blanco migrated to Guatemala in 2006 for domestic work where her employer abused her and trapped her inside the house for two years.

“I was never paid anything, I had no right to leave the house, I was locked in the house until I escaped. I know what it’s like to be a migrant worker and have no rights,” she says.

The LUNA training was “super important. It was tremendous personal growth for me but also growth for me as a leader. It improved how I’m able to be a leader among women,” Blanco says.

“We needed an approach to leadership that is different from the male-dominated, hierarchical structure,” says IDWF Latin America Regional Coordinator Adriana Paz Ramírez, who spearheaded the project and spent a year organizing it. “We needed a different type of leadership with new values, a leadership from the personal, coming from our deepest wounds, our trauma, how the personal translates into political.”

Paz Ramirez, who led LUNA’s political education component, says domestic worker leaders were eager for leadership training, and going forward, she plans to hold LUNA every two years. “The need for a constant renewal of leadership is key to the growth and sustainability of the movement,” she says.

“Even with capable political education and organizing support, leaders who have been socialized that power equals abuse and dominance will find it hard to create leadership models that don’t reproduce the models of power they have seen as poor women, as domestic workers, and as members of traditionally excluded ethnic populations,” says Paz Ramírez.

“For me, it has changed me a lot as a person,” says Santander from SINTRADESPY in Paraguay. “I’ve learned how to delegate and share responsibility. I have learned I can’t do everything myself. When we try to do everything ourselves, it makes us weaker and our organizations weaker.”

LUNA also served to connect domestic worker leaders across the regions and they now engage each other in support for their projects. “Because we are so dispersed, we have been able to re-establish confidence in each other and has made us much stronger across geography, communities and regions, says Blanco. “We decide the mechanism to meet our goals so we’re all on our same page.”

María de la Luz Padua, who worked as a domestic worker for 10 years and is now a leader in Mexico’s domestic workers union, SINACTRAHO, says “LUNA was an experience in growth as well as self-recognition, to know myself as a person, to know that all our organizational work can spend and exhaust us and lead to frustration, but there is always a light in it, and that light is the other women in the same position as us.”

Padua, who says through LUNA she gained increasing confidence in herself as a leader, was thrilled to be selected as one of two LUNA participants to deliver graduation statements. Standing before the group at the close of their final training in Rio de Janeiro, Brazil, Padua told domestic workers:

“We find that our humanity reflexively responds to impulses ingrained in us by our lived experiences, and somatics teaches us to pay attention to the most important thing: ourselves, through resilience and that force that intensely shouts at us, “Never again will we allow a domestic worker to be victimized, harassed, humiliated.”