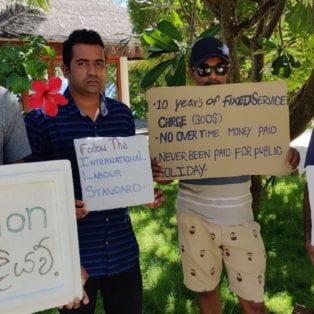 The Maldives Trade Union Congress (MTUC) and its affiliates say the government must rapidly address the economic and health impacts of the COVID-19 crisis, urging passage of occupational safety and health and labor legislation and an economic stimulus package targeted to protect jobs and income security of the island nation’s most vulnerable workers.

“All actions and policies must prioritize and protect worker rights and ensure decent work for all, with the inclusion of the migrant worker population in the country. Further, policies must be developed in consultation with trade union and employer organizations,” MTUC says in a statement.

With its population spread across 188 islands, Maldives is highly dependent upon travel and tourism, which has been hard hit in the coronavirus crisis, and workers are suffering the brunt of the impact. More than 11,000 resort workers, including migrant workers, are on unpaid leave or have received pay cuts while undocumented migrant workers were forced to leave the resort islands and are trapped in the capital, Malé, unable to return home.

Union activists say the government issued contradictory regulations in a scramble to keep the resorts operating. With rapidly changing regulations, Ibrahim Ziyad, branch leader of the Tourism Employees Association of Maldives (TEAM), was arrested and detained last month after returning to work for violating coronavirus travel restrictions. He was fired a day after being arrested, a move seen by TEAM as an act of retaliation for his union activities, which have paved the way for safe working conditions for employees.

Ziyad, who has since been released, still faces a six month jail sentence because charges have not been dropped.

A staff member at JA Manafaru, a five-star luxury resort in the North of Maldives, Ziyad was asked to go on annual leave by management following an announcement by the Maldives Health Protection Agency (MHPA) of a new 14-day travel restriction to combat the spread of COVID-19. Ziyad departed to his island of residence, HA Kelaa on March 14 (a day before implementation of the restriction), planning to return to work later on. While the MHPA announcement mentioned restrictions on travel between inhabited islands, it allowed for resort employees to travel between their homes and their workplaces.

Upon completion of his annual leave, Ziyad returned to the resort and was admitted by hotel security. Unaware of a further notice by the MHPA that restricted all forms of travel, which was circulated internally to hotel staff on March 18, Ziyad was visited in his quarters by the human resources manager and resort doctor who said that he was in violation of MHPA orders and would have to remain in isolation pending the resort doctor’s clearance.

The following evening Ziyad was arrested by police and sentenced to a 15-day prison term pending investigations. He was terminated from employment a day later.

On March 25, the MHPA issued a new notice allowing resort employees to travel between resorts for employment and on holidays.