The Uzbekistan government again forced more than 1 million teachers, nurses and others to pick cotton for weeks during last fall’s harvest. But this time, the government went to extreme measures—including jailing and physically abusing those independently monitoring the process—to cover up its actions, according to a new report. 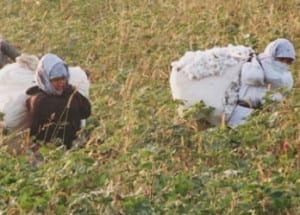 Roughly 1 million teachers, nurses and other workers are forced each year to toil in Uzbekistan’s cotton fields. Credit: Uzbek-German Foundation

Covering Up for Cash
Uzbekistan, which gets an estimated $1 billion per year in revenue from cotton sales, faced high penalties for not addressing its ongoing forced labor. But rather than end the practice, the government sought to cover it up, according to the report, produced by the Uzbek-German Forum for Human Rights.

Last week, the Cotton Campaign, a coalition of labor and human rights groups that includes the Solidarity Center, presented a petition signed by more than 140,000 people from around the world to World Bank President Dr. Jim Yong Kim, calling on the bank to suspend lending to the agriculture sector in Uzbekistan until the Uzbek government changes its policy of forced labor in the cotton industry.

Farmers and business owners also were coerced by the government, the report found. Farmers are forced to plant state-ordered acreage of cotton and wheat or face the loss of their land. In 2015 the government relied on law enforcement to monitor and control the agricultural process and instill fear in farmers. Police regularly patrolled cotton fields, inspected farms and monitored workers and the harvest progress.

Officials and business owners, under pressure to support the national cotton harvest plan, ordered 40 percent or more of their employees to pick cotton, often in written directives. 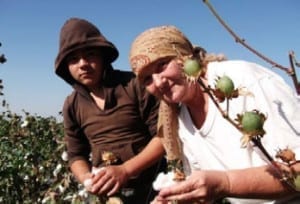 Physically Abused in Prison
Among independent monitors harassed by the Uzbek government, long-time human rights and civic activist, Elena Urlaeva, was arrested at least four times during the 2015 cotton harvest as well as twice during the spring planting and weeding season.

The head of the Tashkent-based Human Rights Alliance of Uzbekistan, Urlaeva reported that she was injected with sedatives, stripped searched and forced to go without sanitation facilities during one incarceration last year. Another time, Urlaeva, her husband, their 11-year-old son and a family friend and farmer who had invited them to stay on his land were arrested because Urlaeva “photographed the fields without permission.”

For years, the Uzbekistan government has forced health care workers, teachers and others to pick cotton for 15 to 40 days, working long hours and enduring abysmal living conditions, including overcrowding and insufficient access to safe drinking water and hygiene facilities.