In Colombia, the national union of food workers, SINTRAIMAGRA, is denouncing the murder of one of its union leaders and is asking the government to identify, capture and prosecute those who perpetrated the crime.

Shortly before he died, Edilberto Niño Cristancho told authorities he was stabbed 18 times by two assailants as he boarded a taxi November 4 in Villavicencio. 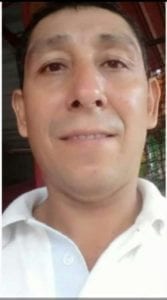 Niño Cristancho was leading an organizing and formalization campaign for palm oil workers in the country’s fertile eastern plains together with the Central Unitaria de Trabajadores (CUT).

Palm oil workers in Colombia and around the world are part of a global supply chain that often exploits human labor to feed the world’s growing demand for household products and cosmetics. Palm oil workers are forced to work long hours in hazardous conditions, without adequate safety equipment and unprotected from contact with chemicals like paraquat, an acutely toxic chemical.

With CUT, Niño Cristancho sought to ensure palm companies in the region fully complied with workers’ constitutional and legal rights, as well as with International Labor Organization conventions, such as the right to form unions and bargain contracts.

For decades, Colombia was the most dangerous country for union leaders and members, with thousands of activists murdered over the past 20 years, and it remains among the five worst countries for worker rights, according to the International Trade Union Confederation (ITUC) 2018 Global Rights Index. Perpetrators of murders and attacks are rarely punished.

Although Colombia’s overall homicide rate dropped after a 2016 peace agreement between the government and the Revolutionary Armed Forces of Colombia (FARC), worker rights activists are now facing a worsening security environment. Between January 1 and August 27, 14 union members were murdered, six were physically attacked and 134 threatened with violence, according to the Escuela Nacional Sindica Information Database of Human Rights.

Social activists, indigenous leaders and environmentalists also are being murdered in greater numbers. Nearly 200 community leaders were killed in 2018.

Unions are concerned that recent statements by the government linking social protests to armed groups encourages violence, and SINTRAIMAGRA is asking the government to provide security guarantees to union members and union leaders.