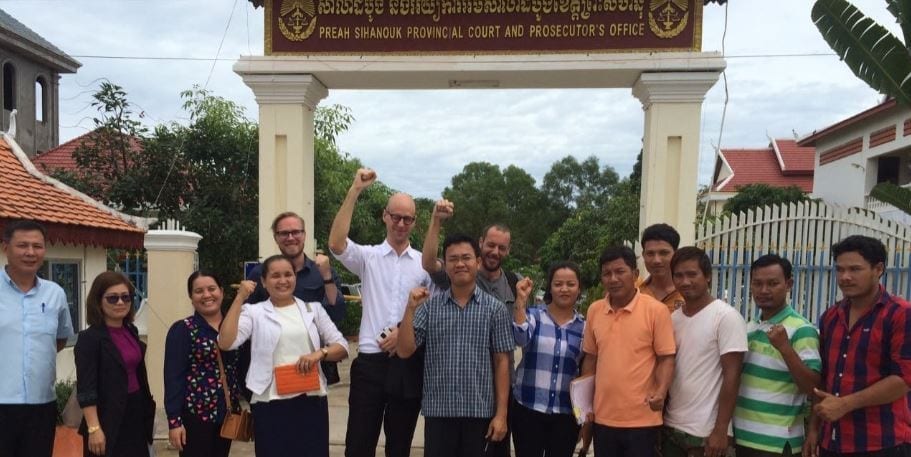 A $60,000 claim by Cambodia’s largest brewer against the Cambodian Food and Service Workers Federation (CFSWF) and its leader, Sar Mora, was dismissed this week by the Cambodian Provincial Court in Sihanoukville, putting an end to what the union alleges is the latest volley in the company’s years-long campaign to intimidate workers.

Cambrew, which is 50 percent owned by a Danish brewing conglomerate Carlsberg, had filed a civil case against the federation alleging damages for a spontaneous, five-day walkout by 100 workers in August last year.

CFSWF—co-represented by the Solidarity Center and Cambodian human rights and legal aid NGO Center for Alliance of Labor and Human Rights—welcomed the outcome of the legal case, but also said the suit and the court’s $3,000 fine against the leader of a second independent union, Democratic Workers Union, is further evidence a long-term campaign of intimidation by the company against workers.

Mora said the suit was an attack on workers’ right to fair representation and characterized the suit against himself and CFSWF as harassment—because he was personally named in the lawsuit and under Cambodian law could have been imprisoned if CFSWF failed to pay a fine imposed by the courts.

“I think the real cause [for the case] is that Cambrew doesn’t want our independent union in their company, and from time to time they make threats to our members, activists and union leaders,” he said.

CFSWF alleges that the legal attack represents a years-long pattern of hostile acts by the employer, including: