Gender-based violence (GBV) is one of the most prevalent human rights violations in the world—and yet not enough is done to prevent it, especially at the workplace. 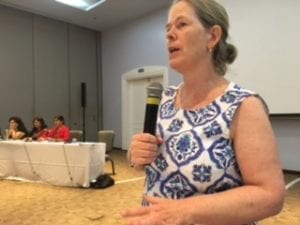 McGowan co-moderated the September 9 AWID Cross-Movement Initiative, “Building Alliances to End Gender-Based Violence in the World of Work,” a panel co-sponsored by the International Trade Union Confederation (ITUC) and the Solidarity Center. Maria Tsirantonaki from the ITUC co-moderated.

The more than 50 participants taking part in the session joined in discussing definitions of gender-based violence at work. Defining GBV at work is important for developing strategies to end it, McGowan says. “The reason we focus on the world of work is because there are different rules that govern that space.

Joining McGowan on the panel, a women union leader and a women from a worker association representing workers in Brazil and the United States discussed strategies for successfully ending workplace gender-based violence.

Junéia Batista, national secretary of the Confederation of Workers Union (CUT) in Brazil, discussed through a translator how the union is encouraging women to speak out about violence at the workplace because it is “difficult to report harassment, difficult to get evidence of harassment.”

In Sao Paulo’s banking sector, she says, women recently won a clause in their union contract that prohibits moral harassment in the workplace, giving women an important tool to demand an end to harassment.

Julia Perkins, Fair Food Program Education Coordinator with the Coalition of Immokolee Workers in Florida, shared how the union’s 16-year campaign for the rights of tomato pickers achieved a workplace environment virtually free of sexual harassment. Women in the Immokolee tomato fields, mostly migrant workers from Central America, had been frequently physically and sexually assaulted. Assaults took place in the bus on the way to the fields, with managers who controlled women’s pay, and in the fields.

Recognizing the growers who employed the workers—and the supervisors and staff that harassed them—would not take action, the coalition included concrete and enforceable protections against GBV in a larger system of labor rights and enforcement developed by the workers themselves, called the Fair Food Program.

“Zero tolerance for sexual harassment means workers now know they have a right to stand up for their rights,” says Perkins. The agreement with growers and buyers established a 24-hour call center for workers to report violations of their rights, immediate investigation and remediation, and severe economic consequences for growers who don’t act quickly and effectively to end GBV in their fields and processing centers. Growers must allow worker-to-worker education on company time so “women and men are talking to other women about their right to name and demand an end to sexual harassment and verbal abuse.”

Creating a Campaign to Stop Gender-Based Violence at Work 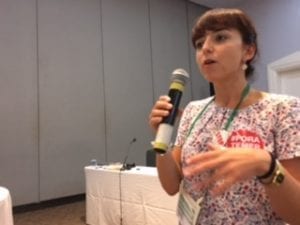 The ITUC’s Maria Tsirantonaki outlines the process by which an issue like gender-based violence becomes an ILO standard. Credit: Solidarity Center/Tula Connell

Turning to the session’s strategy portion, Tsirantonaki outlined the process by which an issue like gender-based violence becomes an ILO standard, or “convention.” Next month, the ILO convenes a meeting with labor, business and government representatives to discuss drafting a gender-based violence at work convention, which will include arriving at a definition of GBV at work, outlining provisions to prevent GBV at work and possibly defining specific groups of workers that should be covered by the convention.

To illustrate the process, Fish Ip, a regional coordinator for the International Domestic Workers Federation (IDWF), described how domestic workers around the world successfully campaigned for an ILO standard covering domestic workers (Convention 189). Passed in 2011, Convention 189 culminated a five-year campaign in which domestic workers networked, met with each other around the globe to define their priorities and described their work experiences in meetings with ILO officials. Twenty-two countries have now ratified the convention, meaning they must abide by its provisions. 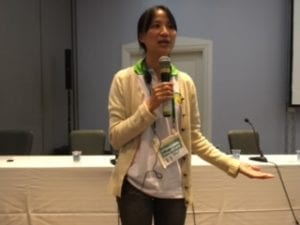 Building on Ip’s emphasis on the effectiveness of domestic workers telling their stories and being central to the policy-making process, Janet Lai, a session participant from Global Affairs in Canada, offered suggestions from a small group discussion that including putting working people front and center in the campaign.

“You need the voice of the people who actually experience gender-based violence,” she says. “We need a compelling story, we need a clear narrative and we need talking points.”

The ITUC has launched a website for the campaign to achieve a gender-based violence at work standard, and encourages people to upload stories and other information.

“The voices of the people who are impacted are the voices that must drive the narrative and action,” says McGowan, “because that is where the momentum will come for actual change.