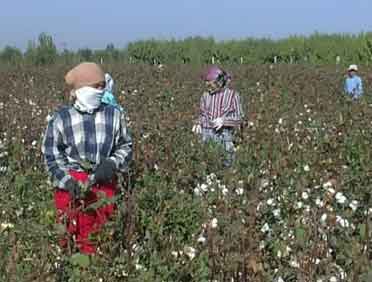 Some 30 global unions, corporations and nonprofit networks are urging the U.S. State Department to ensure its upcoming Global Trafficking in Persons report accurately reflect the serious, ongoing and government-sponsored forced labor in Turkmenistan and Uzbekistan.

“The Uzbek government continues to operate one of the largest state-orchestrated systems of forced labor in the world,” according to letters sent today by the organizations, which include the Solidarity Center, the AFL-CIO, AFT and the Australian Council of Trade Unions. (Read the letters here and here.)

In Turkmenistan, as in Uzbekistan, the government’s “mass mobilization of citizens to harvest cotton degraded public services, especially schools, which sent their teachers to pick cotton,” according to the organizations. “Some officials also forced civil servants to clean and landscape public spaces and to clean the officials’ homes.”

In its 2014 report, the State Department ranked Uzbekistan as “Tier 3,” a designation that means it does not fully comply with the minimum standards set by the U.S. Trafficking Victims and Protection Act (TVPA) and is not making significant efforts to do so. Turkmenistan was ranked on the Tier 2 Watch List, meaning its government does not fully comply with the TVPA standards but is making significant efforts to become compliant.

The Trafficking in Persons report “is an important means to shine light on modern-day slavery and to press governments to do more to eradicate it,” the organizations state. Maintaining the Tier 3 ranking not only accurately reflects the reality on the ground, they say, but will help press the governments to take meaningful steps to end forced labor. The letters were sent to U.S. Secretary of State John Kerry and Ambassador Patricia Butenis, acting director of the State Department’s Office to Monitor and Combat Trafficking in Persons.

A report released this month found that extortion and bribery fueled the forced labor behind Uzbekistan’s cotton harvest in autumn 2014, a coerced mass mobilization that took teachers, health care workers and millions of other employees away from their duties for several weeks.

The U.S. Trafficking in Persons report, issued annually for the past 14 years, covers 188 countries and was mandated by the 2000 Trafficking Victims and Protection Act. The act sets standards to eliminate trafficking and creates enforcement measures, such as the withholding or withdrawal of U.S. non-humanitarian and non-trade-related assistance for countries with low rankings.