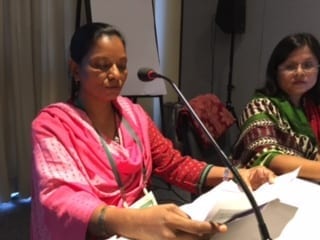 Bangladesh women garment workers make 20 percent less than their male counterparts and are often physically and sexually harassed. Yet women comprise 80 percent of the country’s 4 million garment workers, and the garment industry accounts for more than 80 percent of Bangladesh’s export earnings, according to Solidarity Center Senior Program Officer Lily Gomes, speaking on a panel yesterday at the 2016 Association for Women’s Rights in Development (AWID) forum in Bahia, Brazil.

The panel, the first of several Solidarity Center-sponsored sessions at the September 8–11 AWID forum, focused on the struggle for gender equality by Bangladesh women garment workers and migrant workers.

When women workers form unions, they improve their working conditions. But it is also necessary for women to shift the gender dynamics, says Gomes. Women now make up more than 61 percent of union leadership in the factory-level unions that have formed in recent years, and women also are participating in Solidarity Center gender trainings, which focus on women’s economic empowerment. Following recent trainings, for example, many women garment workers opened their first bank accounts, and are increasingly becoming more active in their unions.

BOMSA, a migrant worker rights organization, provides workers with pre-departure training about how to protect their rights at work in the countries where they will work, she says, and also provides child care and access to school for the workers’ children.

Bangladesh women workers also are seeking allies in their struggle across the global feminist movement, says Gomes, and panelists sought ideas and support from participants, who included a range of women’s rights activists.

Says Gomes: “We will be connected. We are women. We will make the world hear our voice.”