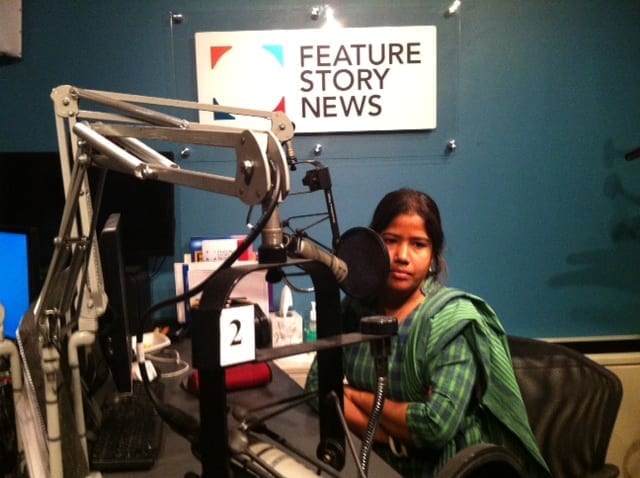 Nomita Nath gets many calls each day at the union office in Chittagong, Bangladesh, from garment workers seeking immediate assistance.

Some are locked out of factory gates by supervisors who see them as union supporters and effectively fire them. Others are faced with an employer request to sign a blank piece of paper, which is “a very dangerous thing,” says Nomita. The tactic is frequently used by factory managers to retaliate against union supporters and enables employers to write false assertions above their signatures, making it look like a worker stole money or goods or rejects the union.

No matter what the request, says Nomita, “if a fellow worker has a problem, it is my problem.”

Nomita, president of the Bangladesh Independent Garment Workers Union Federation (BIGUF), began working in garment factories at age 12, and several years later, joined with co-workers to form a union at Eastern Fashion Ltd. with BIGUF’s assistance. She was elected president of the factory union and went on to participate in BIGUF trainings and in a fire safety program organized by the Solidarity Center. She now regularly trains worker leaders and organizers on organizing methods, labor law, gender inclusion and equity and fire safety. She traveled to Washington, D.C., in recent days, where she talked with Solidarity Center staff.

The pleas for help Nomita hears from garment workers highlight the discrepancy between an environment in which unions for the first time can be registered and the resistance workers face from employers when they try to do so.

Following the Rana Plaza tragedy last year in which more than 1,100 workers were killed when the multistory building collapsed, at least 130 unions have filed for official recognition, including 42 through BIGUF’s assistance. Yet when workers try to exercise their rights for safer workplaces, they are often harassed and threatened, with some supervisors going so far as to tell landlords not to rent to workers who support a union, says Nomita. Of the 42 unions joining with BIGUF, only five so far have collective bargaining agreements because employers put up roadblocks to concluding formal pacts.

In at least two factories this year, workers seeking to form a union have been physically attacked and beaten, with union organizers the target of violence as well. Nomita understands the dangers she faces as a worker advocate in Bangladesh.

“We know and we are aware we will be threatened,” she says. “But no matter what obstacles come our way, we’ll meet them.”

Most of the 4 million garment workers in Bangladesh are women, and that poses a special challenge for organizers seeking to help workers form unions, says Nomita. Women’s “entire family, their house, is dependent on women’s jobs. They’re afraid of losing it,” she says.

Nomita is passionate about helping women overcome barriers to forming unions, which she sees as the best way for women to assert their rights as citizens equal to men.

“I am a woman and I want female workers to have rights,” she says. “I’ve watched this since I was little. They try to suppress female workers. The only way to hear a woman’s voice is through the union.”

Helping women overcome the barriers to joining a union and achieving the collective strength they need to secure safe workplaces, living wages and respect on the job is the challenge that guides Nomita each day.