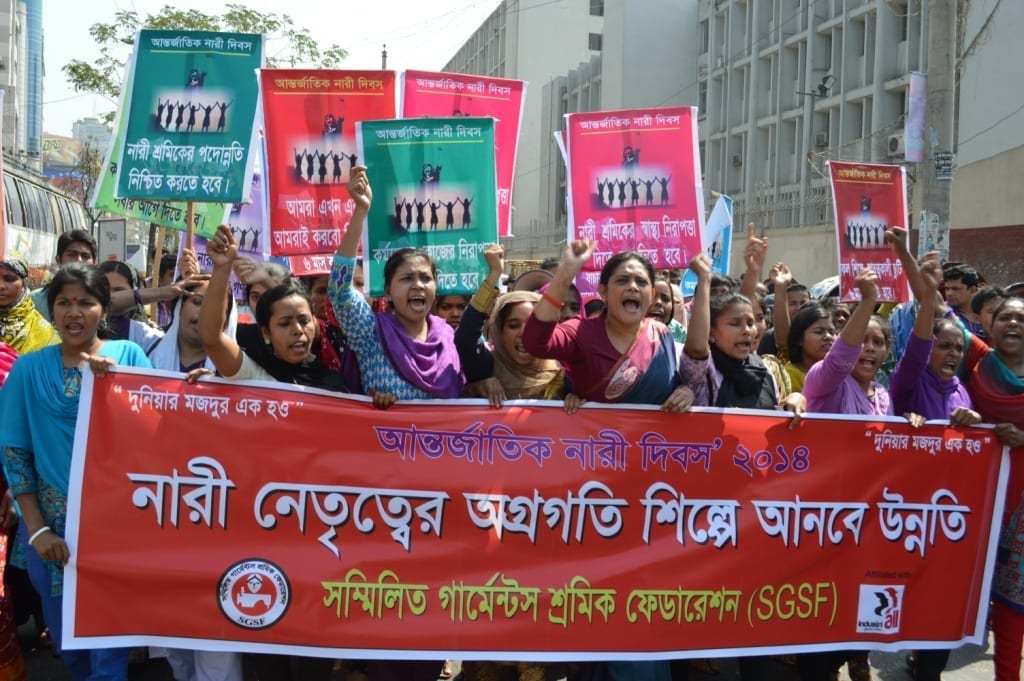 Garment workers march on International Women's Day in Bangladesh, where the Solidarity Center has worked for years with union allies to improve wages and working conditions. Credit: SGSF

More than 60 workers at a Bangladesh washing facility have been fired since late April and at least one union leader has been physically assaulted in what their union says is a campaign to end union representation at the plant.

The Sommilito Garments Sramik Federation (SGSF), which represents the workers at the Raaj RMG Washing Plant, says the incidents escalated after the union made a formal request to management in March to begin collective bargaining. The factory union was officially registered in January.

One worker, the union treasurer, was fired while she was pregnant—effectively ending her union activity and her maternity benefits, says SGSF. Replacement workers are reportedly being hired only on the condition that they not join the union, and false criminal charges have been filed against several one union  and two members including the union’s general secretary, according to SGSF.

The Solidarity Center’s Dhaka office sent a letter to the Ministry of Labor and Employment on April 23 asking ministry officials to resolve the terminations, illegal under Bangladesh law, and SGSF and the plant union have filed formal labor complaints. To date, government agencies have not responded.

The plant, located in Gazipur, outside Dhaka, the capital, provides services to many garment factories in the area. Dozens of workers trying to form unions at garment factories also have recently been threatened with mass termination, beaten and kidnapped. Many of their lawful applications for new factory-level unions have been rejected for dubious reasons.

Following the Rana Plaza collapse in April 2013, and other high-profile catastrophes, the government showed signs of recognizing worker rights and its own labor laws, allowing workers to form their own unions. As a result, garment workers have registered more than 130 factory-level unions in the past year.

But the recent violence and retaliation against workers seeking to exercise freedom of association has gone unpunished, and SGSF and other garment unions say the government must do more to protect workers who form unions at their factories.
SGSF is calling for Raaj to immediately reinstate terminated workers with back pay and to bargain collectively with workers and the union. Further, SGSF is seeking for dismissal of the false charges against union activists.