Bangladesh: More Firings at Factory Where Workers Seek a Union 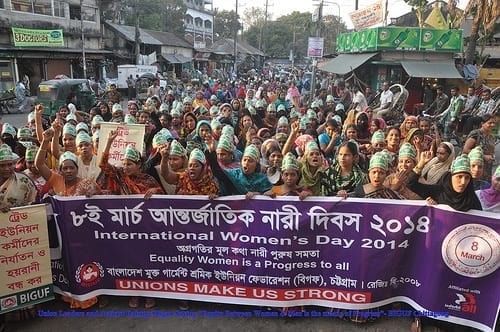 Garment workers continue to be fired and harassed at the Taratex BD Ltd. factory in Gazipur, Bangladesh, according to the Bangladesh Independent Garment Workers Union Federation (BIGUF). More than 100 workers have been fired since they filed for union registration at the factory on February 4.

On Sunday, BIGUF says factory managers detained the new union president and general secretary and pressured them to immediately resign from their positions in the factory by signing previously prepared documents. They signed the documents after they were reportedly threatened, and were then removed from the factory.

The two leaders were elected after the factory terminated the union’s 12 executive committee members in the lead up to the union being registered on April 4. Six union members told BIGUF they have been forced to leave their homes for fear of their personal safety.

BIGUF is working with the factory union to file an unfair labor practice in addition to the one it filed in February 24. The federation says it remains “deeply concerned about the ongoing pattern of anti-union retaliation and mass terminations at Taratex.”

BIGUF is calling for immediate reinstatement and back pay for all workers who have been fired. Further, BIGUF says, authorities must send a clear message that terminations and other forms of anti-union intimidation are unacceptable, will not be tolerated and will be fully prosecuted in accordance with the law.