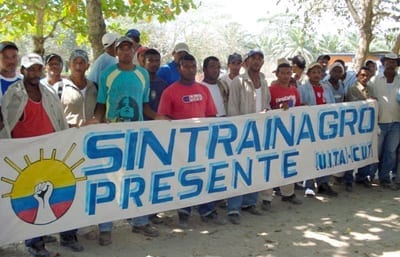 Gunmen fired on a car carrying Guillermo Rivera and Medardo Cuesta, president and treasurer, respectively, of the Colombian rural workers union SINTRAINAGRO, as they were meeting February 24 with members in Valle del Cauca.

Their vehicle was hit by bullets but the two were unharmed thanks to the reaction of Cuesta’s bodyguard. The National Protection Unit has recently denied Rivera’s requests for protection, citing lack of resources. Cuesta was granted protection while visiting the high-risk Valle del Cauca, but union leaders must be able to safely travel the entire country. The International Union of Food, Agricultural, Hotel, Restaurant, Catering, Tobacco and Allied Workers’ Associations (IUF) has written the Colombian authorities to denounce the attack and again demand adequate protection for threatened union leaders.

SINTRAINAGRO, which organizes banana, palm oil, sugar and flower workers, has had some 750 members and leaders murdered by paramilitary organizations over past decades. The union has expressed support for the ongoing peace negotiations between the government and the rebel group, FARC, but also insists on an end to the decades of impunity for those responsible for years of systematic violence against the labor movement.

This is a crosspost from IUF.