Afro-Colombians Fighting against Discrimination at Work 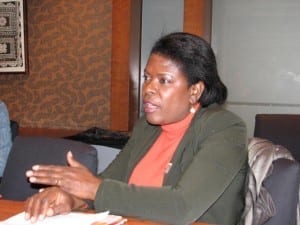 Afro-Colombians are far likelier than other Colombian workers to earn  less than the minimum wage and to be employed in jobs where they cannot form unions  to improve their working conditions. And all of this exclusion “has a strong current of racial discrimination under it,” said Agripina Hurtado, the newly elected president of the Afro-Colombian Labor Council (Consejo Labor Afrocolombiano). A quarter of Colombia’s population is Afro-descendant, yet Afro-Colombians comprise more than three-quarters of the country’s poor.

Many Colombians neither recognize nor acknowledge discrimination against Afro-descendants, Hurtado said, and the council is working to raise awareness among lawmakers and the public about their working conditions. For instance, roughly 75 percent of the workforce in Colombia’s ports—primarily Afro-descendent—is employed under flexible non-labor contracts and consequently not allowed to join unions or bargain collectively.

Further, threats and violence against Afro-Colombian leaders and communities are causing high levels of forced displacement, especially along the Pacific Coast where large numbers of Afro-descendants live. Colombia is the deadliest country in the world for union activists, with 4,000 trade unionists murdered in the past 20 years, many of them Afro-Colombian. “The selective killing of union members is spreading fear” throughout the Afro-Colombian community, she said.

Hurtado said one of the council’s big goals is to ensure that port workers, sugarcane cutters and other workers who are currently hired casually or under subcontracting arrangements are hired under the formal labor contracts that the law requires. That way, they will be covered by the nation’s labor laws and allowed to collectively bargain with their employers. Some 65 percent of Afro-Colombians in the informal sector and 29 percent in the formal sector make less than the minimum wage, according to an in-depth study of the Afro-Colombian labor situation in four major Colombian cities by the National Union School (ENS), a Solidarity Center partner.

Speaking through a translator at the Solidarity Center in Washington, D.C., Monday, Hurtado said the government is taking steps to acknowledge the needs of Afro-Colombians, but only because of pressure from the international community. Overall, the government “doesn’t really take these issues seriously.” The council is working at the national and local levels of government to “insert the issue of racial discrimination into the discussion on wages and worker issues,” she said.

Hurtado, a leader of the public sector union USE (Union Sindical de Emcali), said one of the biggest obstacles is getting members of the Afro-Colombian community to self-identify as Afro-Colombians and join together to fight for their rights on the job and in their communities.

“We aren’t conscious we have these rights, and we don’t go out and fight for them. The government doesn’t recognize us because we are not organized.”

Hurtado and the Afro-Colombian Labor Council are working hard to change that.