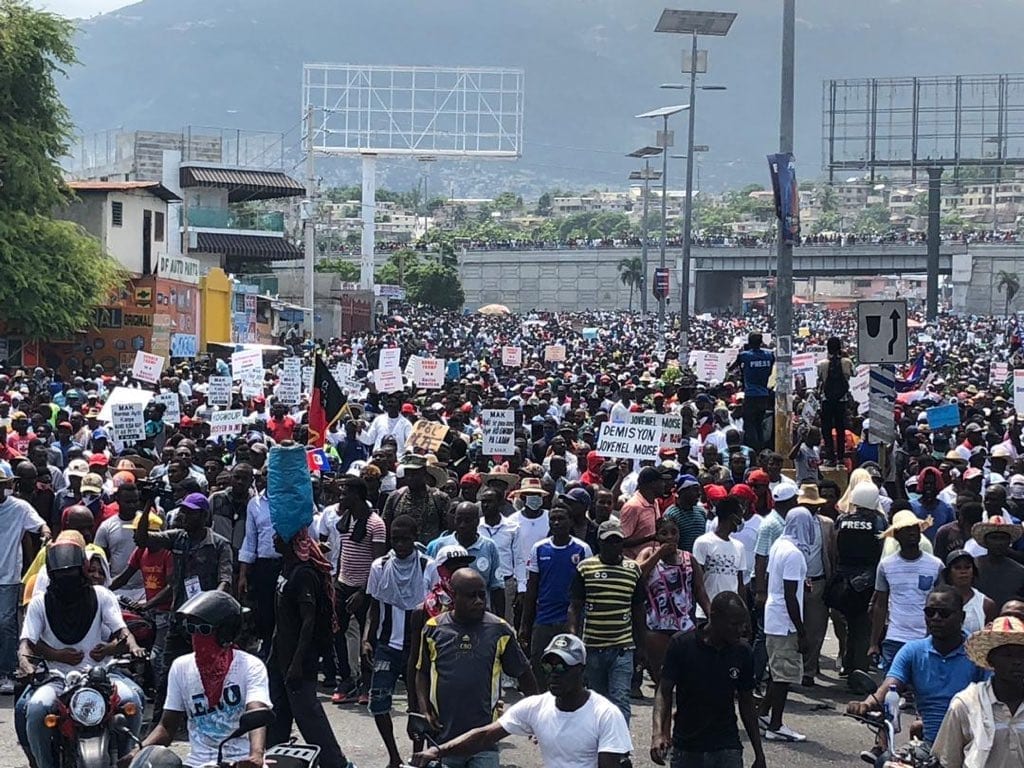 More than 40 labor organizations in Haiti joined a call for vast nationwide legal reforms, including free and fair elections and the resignation of President Jovenel Moïse. The move follows weeks of massive demonstrations against rampant government corruption and wasteful spending that has devastated the economy.

The most recent round of protests began September 2, sparked by fuel shortages, spiraling inflation, a lack of safe drinking water, environmental degradation and food scarcity. Factories, schools, and businesses have sporadically closed with the near daily protests. In one of the largest rallies to date, thousands turned out on Sunday in a peaceful demonstration, with human rights organizations, popular artists, and business leaders joining unions, young workers and the many others hard-hit by the country’s economic crisis.

In the Joint Declaration for a National Rescue Government, issued October 11, more than 100 organizations—including three Solidarity Center union partners–urge all segments of society to join together to demand a return of public services and implementation of an emergency program for the most vulnerable groups. The Joint Declaration also seeks an end to the culture of impunity in the judicial system and demands a clean accounting of public finances.

More than 60 percent of Haitians survive on less $2 a day, and more than 2.5 million fall below the extreme poverty line of $1.23 per day. Haitians are outraged that the island has received millions of dollars in aid since the 2010 earthquake, but public services and infrastructure are nearly nonfunctional.

A Solidarity Center survey this year found that the daily minimum wage for export apparel workers in Haiti is $5.07—more than four times less than the estimated cost of living. These workers—the majority of whom are women who support families—are forced to toil longer for less due to diminished purchasing power and are unable to cover daily necessities, including food.

“The High Cost of Low Wages in Haiti,” which tracked living expenses for garment workers from September 2018 through March 2019, recommends the government increase the minimum wage to an estimated $18.30 per day and allow workers to select their own representatives to the country’s tripartite minimum wage committee. Unions are advocating for these measures and raise them as key remedies to addressing the crisis underway.