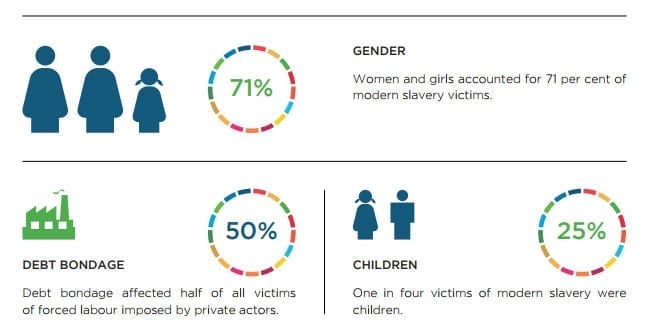 Some 25 million people toiled in forced labor around the world in 2016, and 18 percent were children, according to two new reports by the International Labor Organization (ILO) and the Walk Free Foundation.

Far more women and girls experience forced labor, making up 58 percent—9.2 million—of the 16 million in forced labor in the private economy. Some 50 percent of women and men in forced labor also were in debt bondage, in which personal debt is used to forcibly obtain labor. This proportion rises above 70 percent for adults forced to work in agriculture, domestic work or manufacturing.

While forced labor occurs all around the world, it is most prevalent in Asia and the Pacific, where the proportion of those trapped in forced labor is four per a population of 1,000. The European and Central Asian region has the second highest proportion, with 3.6 people in forced labor per 1,000, followed by Africa (2.8), the Arab States (2.2) and the Americas (1.3).

According to the ILO report, children make up 18 percent of victims of forced labor exploitation, 7 percent of those in state-enforced forced labor, and 21 percent of victims of commercial sexual exploitation. Overall, the reports estimate that there are 152 million children involved in child labor globally, with 73 million of them in hazardous work that is dangerous to their health and safety. This overall figure represents a decline from 2012, part of a larger trend in lowering the amount of children involved in labor in the 21st century.  However, this decline has slowed dramatically in recent years.

Many experts suggest the reports’ estimates could understate the extent of forced labor. Fiona David, executive director of Global Research at Walk Free told the Washington Post the estimate could be conservative because of the challenges of doing research in conflict areas like Syria or Nigeria.

The ILO reports include strategies for ending forced labor that center on achieving the United Nation’s 2030 Agenda and  include studying root causes of modern slavery like debt bondage, and developing policies that specifically address the gender imbalances of modern slavery.

In combatting child labor, Solidarity Center works with the Global March Against Child Labor, a worldwide network dedicated to eradicating the practice, and is a member of the multi-member Child Labor Coalition.