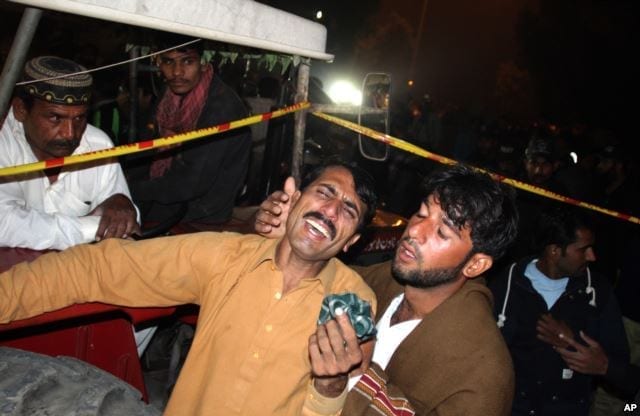 Workers once again gave their lives for their jobs when a plastic bag factory collapsed in Lahore, Pakistan, yesterday, killing at least 21 and injuring dozens. Between 150 and 200 workers, including child laborers, were in the factory when the building collapsed. Rescuers, who mostly include members of the Pakistan Army, report hearing voices in the rubble, and family members say they have received calls from relatives trapped in the debris. With limited on-the-ground rescue capacity, the Army-led rescue operation has saved many workers trapped under the debris.

Workers at the Rajput Polyester plastic bag factory reported cracks in the production floors to management after a 7.5-magnitude earthquake hit the country October 26, according to Solidarity Center sources and media reports. When workers brought the cracks to the management’s attention, they reportedly were told managers work under the same roof.

According to Al Jazeera, “Chief doctor Zia Ullah of Jinnah Hospital, where some injured have been taken, said most of the victims were young workers, with many suffering head injuries and fractured limbs.” News photos from a variety of outlets confirm that children are among those killed in the collapse.

Workers at the factory did not have a union. Factory operations run 24 hours, seven days a week, with three shifts each comprised of some 150 workers. Rajput is located in the Sundar Industrial Estate, an export processing zone in Raiwind, 28 miles from Lahore. No factories in the industrial estate have unions that are not employer-run. The zone’s small hospital could accommodate only a few of the injured, Solidarity Center sources say.

Pakistan has not ratified the International Labor Organization (ILO) convention on the right to a safe and healthy work environment. In 2012, more than 300 workers were killed when fire swept through a textile factory complex in Karachi.

“Under different conditions, worker representatives could be expected to address this issue with factory management, but in both Pakistan and Bangladesh, factory owners generally refuse to allow trade unions into their factories.”

(For news about working people in Pakistan, check out Labour Watch Pakistan.)