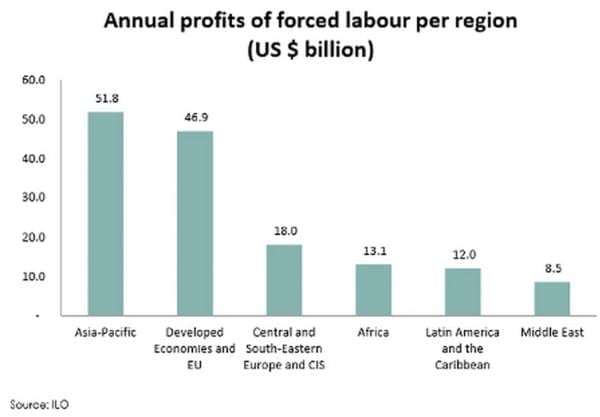 Some 21 million women, men and children are in forced labor, trafficked, held in debt bondage or work in slave-like conditions worldwide, and their toil generates an estimated $150 billion in illegal profits in the private global economy, according to a new report by the International Labor Organization (ILO). The $150 billion in illegal profits is three times more than the previous ILO estimate.

Overall, $51 billion of the estimated $150 billion in illegal profits results from forced economic exploitation, including domestic work and agriculture, areas where women make up much or most of the workforce. Commercial sexual exploitation accounts for $99 billion.

“Profits and Poverty: The Economics of Forced Labor” finds solid evidence for a correlation between forced labor and poverty. In countries where the ILO measured “income shocks” and food insecurity, such as Niger and Bolivia, a larger percentage of forced laborers than people who worked freely came from households where income had declined. In Nepal, only 9 percent of workers in forced labor had lived in food-secure households, compared with 56 percent of freely employed individuals.

The report finds the profit from forced labor is generated from three broad areas:

• $34 billion in construction, manufacturing, mining and utilities.
• $9 billion in agriculture, including forestry and fishing.
• $8 billion saved by private households by not paying or underpaying domestic workers held in forced labor.

An individual is considered to be working in forced labor, according to the ILO’s survey guidelines, if his or her recruitment was not free and involved some form of penalty at the time of recruitment, and if that individual works and lives under duress, and faces any penalty or cannot leave the employer because of the menace of a penalty.