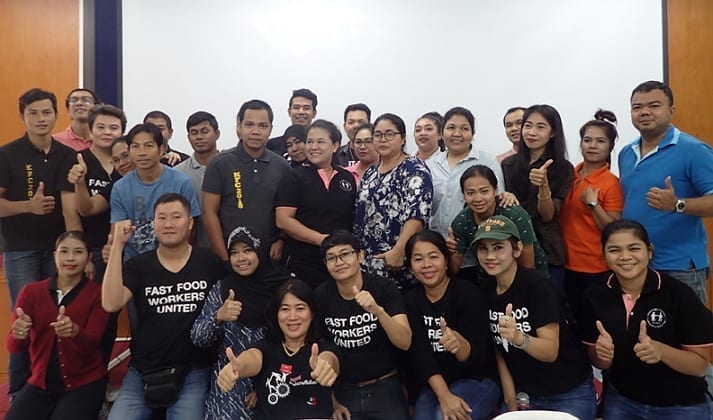 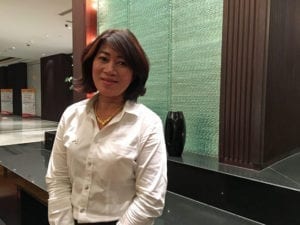 Some 2,000 fast food workers and supervisors at one of Thailand’s largest KFC franchises recently won the first-ever collective bargaining agreement in the kingdom’s fast food industry, a pact that includes an early retirement program, 23 meals provided by the company per year and motorcycle maintenance funds for delivery workers.

The contact also includes the right to union representation in any dispute or grievance, and paid union leave.

The workers are among 2,400 members represented by the Cuisine and Service Workers’ Union, an IUF affiliate.

During negotiations last month, union President Apantree Charoensak, who has been leading the struggle for fast food workers across Thailand for nearly a decade, was fired from her position at Yum! Thailand, which operates some of the KFC franchises. (The new contract covers KFC franchises run by Restaurant Development Ltd., which operates 130 of the 586 KFC restaurants in Thailand.)

Women representing 50 organizations in Thailand issued a statement of solidarity with Charoensak and submitted it to management of Yum! Thailand in Bangkok. Charoensak, along with two co-workers, had been previously dismissed in 2011 following her efforts to organize a union and negotiate a contract with Yum! Thailand. She and her co-workers were reinstated after filing a complaint with the country’s Labor Relations Commission describing their dismissal as retaliation for union activity, an action prohibited under Thai law.

Charoensak, a manager at the corporation where she supervised up to a dozen restaurants, says she began union organizing to rectify what she saw as a large pay disparity between front-line workers and managers. Ultimately two unions formed, one covering front-line employees and one for supervisors. Over the years, she says management also tried to end her union activism by offering her large sums of money, which she refused, and isolated her at work, giving her little to do—time she filled by completing a master’s degree in political science and addressing union members’ concerns.