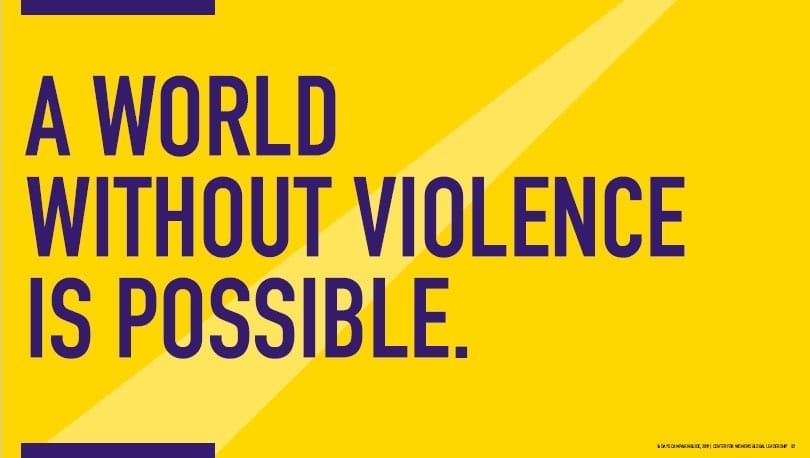 Starting today, International Day for the Elimination of Violence against Women, activists from unions, women’s groups and their allies around the world will take part in 16 days of action with a special mission: They will mobilize their members and coalition partners to encourage—and demand—their governments ratify Convention 190 and update or pass national laws ensuring workplaces are free of gender-based violence.

Passed in June by the International Labor Organization (ILO), Convention 190 is a new global treaty to prevent and address violence and harassment in the world of work that includes gender-based violence and harassment. It addresses the varied forms of work today and includes all workers, such as formal and informal workers, those under any contractual status, job seekers and trainees, and specifically recognizes women workers. It also defines the world of work: that is, where and how work and work-related activities are performed, including, where workers take a rest break or meal, washing or changing facilities, work-related trips, travel, training, work-related communications, employer-provided accommodations and commuting to and from the job.

Union women leaders and their allies fought to make Convention 190 a reality, recognizing that it offers the best opportunity for changing structural systems that feed sexual harassment and other forms of gender-based violence in the world of work.

The annual 16 Days of Activism Against Gender-Based Violence is an international campaign coordinated by the Center for Women’s Global Leadership and used by activists around the world as an organizing strategy to call for the elimination of all forms of gender-based violence. (Follow the 16 Days campaign on Twitter at #16DaysCampaign).

This year’s focus on ending GBVH at the workplace builds on 10 years of action by workers and their allies pushing for an international treaty to address gender-based violence and harassment at work. Along the way, workers and their unions built broad coalitions, educated union members and boosted and expanded the collective strength that ensures their voices are heard.

“Convention 190 might sound like a lofty piece of legislation far removed from the struggles of women and vulnerable workers, but in reality it was drafted and fought for by grassroots organizations, unions and coalitions of mobilized workers from many countries. It reflects their lived experiences,” says Robin Runge, Solidarity Center senior gender specialist.

Laying the Groundwork for 16 Days of Activism 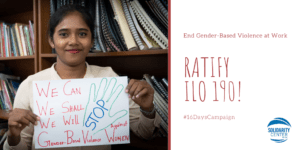 Workers already are deep into the movement for ratification of ILO 190, many starting immediately after the ILO passed Convention 190.

In Indonesia, women union leaders laid the groundwork for their campaign last year by assessing the extent of GBVH at several factories. In late 2018, they interviewed their co-workers at garment and footwear factories and engaged them in informal focus groups. These unique worker-to-worker discussions found high-levels of gender-based violence on the job.

Among 105 Indonesian garment workers who took part in interviews and focus groups, women reported managers and other leaders hit them, pulled their hair, groped, touched and kissed them at work, and asked for sex. One was even threatened with death.

Now, an alliance of Indonesian union and nongovernmental organizations are building on the work of the garment union leaders to create material to lobby the government and parliament to ratify Convention 190. Women activists also are educating union members who are helping institute practices to ensure targets of sexual harassment and other forms of gender-based violence at work are able to report their experiences without retaliation.

In garment factories, for instance, workers form “safe circles” that includes worker representatives and a supervisor to jointly monitor commitments by the union and management to end GBVH.

“The safe circle can be considered as end goal of this approach: creating a safe condition for all workers in the production line,” says Sumiyati, chairperson for Women and Children’s Affairs at the National Industrial Workers Union Federation (SPN–NIWUF), a Solidarity Center partner.

Mobilize from the Ground Up

In Morocco, where ratification of Convention 190 is a key element in annual plan of the women’s committee of the Democratic Labor Confederation (CDT), the CDT is educating members about its importance and is set to launch a national campaign for its ratification.

Touriya Lahrech, a union leader of the Democratic Labor Confederation (CDT) in Morocco and delegate to the final negotiations of Convention 190 in June, is worked with representatives in parliament, where she is an elected representative, to organize informal meetings with the ministry of employment and vocational training before raising the issue in the full House of Representatives.

The 16 Days of Activism campaign is a tool in workers’ long struggle to achieve workplaces free of gender-based violence, where all workers are treated with dignity.

“To write a new script for workers, we need to mobilize from the ground up—grassroots worker movements, human rights and women’s rights NGOs, industry voices and corporate foundations,” says Runge. “When we all call on governments and businesses to change, our collective voice becomes impossible to ignore.”