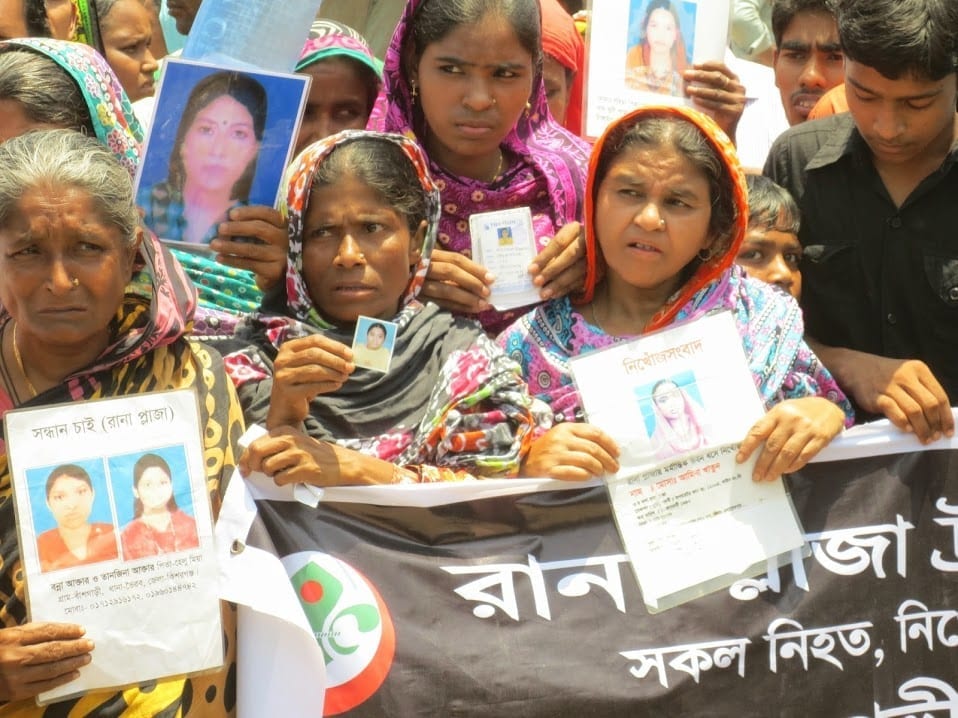 One year ago today, as the walls of the multistory Rana Plaza building collapsed around her, Moriom Begum was trapped, injured and unable to move in the dark, surrounded by the lifeless bodies of her co-workers.

A sewing operator at New Wave Style, one of five garment factories in Rana Plaza, Morium sat pinned beneath furniture for two days before she was rescued. More than 1,100 garment workers, mostly young women, were killed when the building pancaked around them. At least 2,500 garment workers were injured. Most, like Moriom, sustained such serious and life-altering injuries that they cannot work and may never again be able to do so, throwing their survival—and the survival of their families—into question.

Since the Rana Plaza disaster, 54 people have died or been injured at garment factories in Bangladesh, according to data compiled by Solidarity Center staff in Dhaka, the Bangladesh capital. The Rana Plaza tragedy closely followed the deadly Tazreen factory blaze, which killed 112 garment workers in November 2012. Survivors and the families of workers killed in both disasters have received little, if any, compensation, and many are struggling to survive.

Although labor organizations and prominent retailers created a $40 million compensation fund last December to aid the families of workers killed and injured at Rana Plaza, less than $20 million has been donated.

The government has taken several positive steps since the Rana Plaza tragedy, including accepting union registrations. To date, more than 100 have filed for official recognition. Yet when workers try to exercise their rights for safer workplaces, they are often harassed and threatened.

Garment workers seeking to form unions are intimidated by factory managers, who sometimes threaten to kill them, according to a recent Human Rights Watch report. Union organizers like Hasina, have been attacked, beaten, and in some cases, left for dead, when they spoke with garment workers about forming a union. If garment workers do succeed in registering their union, factory managers often prevent the workers from negotiating contracts for safer working conditions and living wages.

Garment workers and other workers in Bangladesh’s export-processing zones are subject to a different, much weaker set of labor laws than workers in the rest of the country, even though the $20 billion garment industry is Bangladesh’s biggest earner of foreign exchange.

The safety and lives of Bangladesh’s workers will not improve until they can exercise their rights, organize freely, be fairly compensated and ensure that their workplace is not a death trap. Reforming labor laws so they meet international standards for freedom of association and collective bargaining rights is part of the solution, says  A. K. M. Nasim, senior legal counselor at the Solidarity Center’s office in Dhaka.

Employers and the government also must protect and respect the right of workers to form and join independent unions. Workers must not be intimidated, harassed, verbally or physically assaulted or fired from their jobs when seeking to form a union or represent their own interests, including the right to refuse to enter or remain in a dangerous workplace.

Moriom, who lost her right hand and suffers from constant pain, said the government and employers should understand the value of other people’s life.

If they value life, she said, they will ensure that no more garment workers are injured or killed.