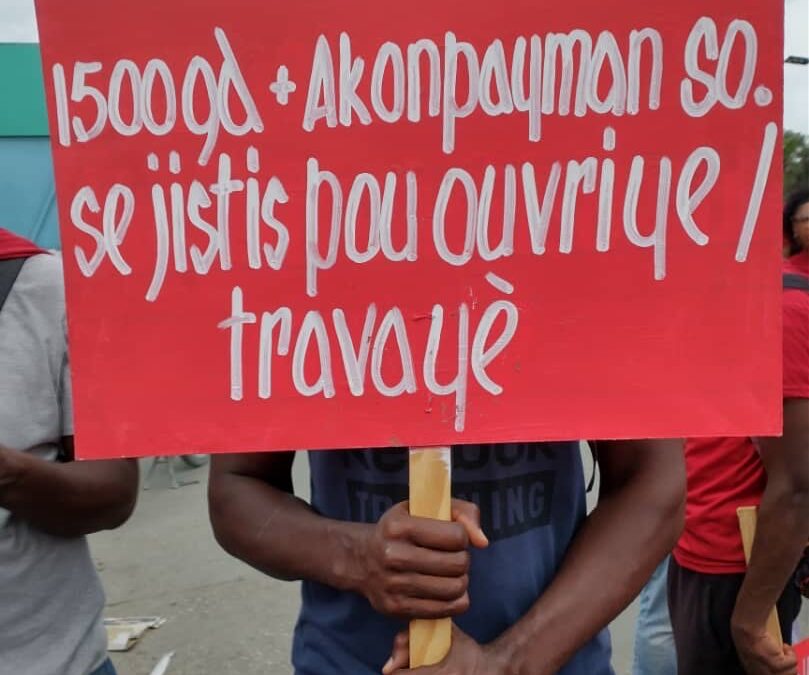 A Hatian garment worker at a demonstration holds a sign that reads, "1500 gourdes + social accompaniments is justice for the workers.:

Haitian garment workers scored a huge victory as a coalition of unions negotiated an agreement with the government to provide garment workers in Port-Au-Prince with transportation and food stipends.

“In our struggle for a better working environment and fair wages we have always emphasized that the government should provide social support to workers, especially those in the textile sector. And here it is for the first time that our demands have been heard, even if it is not yet in effect, but the government has planned to accompany the workers by offering them transportation and food costs for an amount of 135,000,000 gourdes ($1,116,595),” said Telemarque Pierre, coordinator of SOTA- Batay Ouvriye.

“From now on, we would like the government to take care to include these accompaniments in the annual budgets so that the workers can always benefit from these advantages.”

The government will distribute the funds via a mobile app. The stipend will cover the cost of travel to and from the factory, and include a lunch stipend. Inflation and gang violence have led to skyrocketing prices for food and fuel such that workers cannot afford travel to and from work or food at lunchtime.

The agreement underscores the importance and effectiveness of unions in improving the lives of workers.

“We can say now that every time there is a problem, the workers come to the union because they always find that the unions are a real help,” said Eliacin Wilner, GOSTTRA organizer.

Unions are working to ensure that workers are aware of the program and able to access their benefits.

The agreement is the result of minimum wage protests by garment workers in January 2022. Fueled by frustration over three years without a minimum wage increase and the rising cost of basic necessities and services, workers at the SONAPI industrial park in Port-Au-Prince held a spontaneous protest to call for a wage increase.

The peaceful demonstrations extended into February and were met with police violence.

The protests led to negotiations between the government and a coalition of nine textile unions. The coalition’s advocacy resulted in an increase of the minimum wage from 500 gourdes ($4.82) per day to 685 gourdes ($5.85) per day.

Solidarity Center studies repeatedly have demonstrated the daily minimum wage is far less than the estimated cost of living in Haiti. Significant job losses due to supply chain disruptions have left most garment workers facing diminished working hours or layoffs, threatening their ability to provide for their families. These periods of income precarity are especially dire given that most low-wage garment workers lack savings.