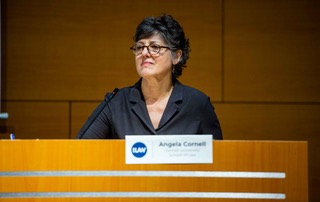 As the world witnesses some of the greatest challenges to democratic governments since the 1930s, unions offer a strong and essential counter to the trend, according to Cornell University Professor Angela Cornell. 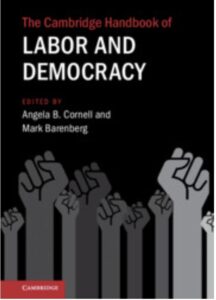 Cornell, co-editor of The Cambridge Handbook of Labor and Democracy, along with several book contributors, opened the Conference’s third and final day with a discussion of the handbook, an interdisciplinary and cross-regional anthology. (Hear Cornell and ILAW Board member Mery Laura Perdomo discuss unions and democracy on a recent Solidarity Center Podcast.)

More than one quarter of the world’s population now live under democratically backsliding governments, including some of the world’s largest democracies.

Cornell listed the ways in which unions fuel democracy, including by providing a counterviling role to corporate power.

Further, said Cornell, “new research on the role of unions and in building solidarity among their members demonstrates the ways in which unions can bridge racial and national divides. Union members are less likely to support extreme views.”

Economic inequality is a destabiizing influence in most countries, Cornell said, and unions decrease inequality.

“Unions have been instrumental in the passsage of labor protections and the social safety net, including social security, minimum wage and overtime, workplace heath and safety and medical leave, among others.”

Ken Roberts, a professor at Cornell University and book contributor, overviewed how unions have been bulwarks of democracy throughout Latin America.

“Labor has played a central role in trying to restore citizenship rights,” said Roberts. Since the 1960s–1980s, when unions suffered setbacks during military dictatorships and neoliberal reforms that prioritized the interests of the wealthy over working people, the key challenge has been to build broad coalitions, he said. 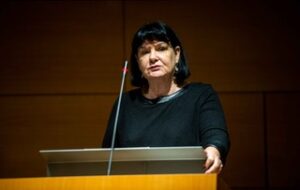 By joining with feminist movements, indigineous communities and territorially-based urban community networks, unions have created strong and successful coaltions. Since late 1990s as part of social pushback against neoliberal model, 14 countries have elected progressive governments and labor has been an important part of moving this unprecedented number of elections, he said.

Most recently, unions were part of successful coalitions that elected progressive governments in Honduras and Colombia and are constructing broad democratic fronts against new challenges from ethnonationalist and extreme conservative groups.

In Africa, “more often than not, unions were the only force fighting decolonization,” said Evance Kalula, chair of International Labor Organization (ILO) Committee on Freedom of Association and emeritus prof of law at the University of Capetown. “Formal and informal collaboration between unions as agents of change and nationalist movements.”

Kalula and co-author Chanda Chungu, contributed the chapter on “African Perspectives on Labor Rights as Enhancers of Democratic Governance.”

Julia Lopez Lopez, a professor at the University of Barcelona, described how unions are standing up to corporations that are using the new model of app-based work to exploit transportaton workers.

“The case of transport sector is one of the cases that show unions are trying to create new strategies against market intervention against multinational efforts to liberalize labor rights,” she said.

Closing the Conference, Sharan Burrow, general secretary of the International Trade Union Confederation (ITUC), overviewed the challenges facing workers and their advocates and pointed to recent legal successes as well, including an agreement that the ITUC and ILO achieved with the Qatar government that ensures more rights for migrant workers, including the freedom to leave their jobs and seek alternative employment.