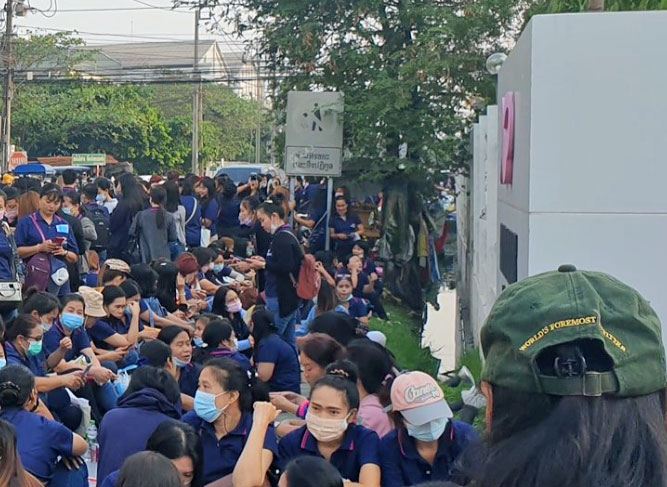 Thai garment workers laid off from Brilliant Alliance factory will receive an historic $8.3 million in back pay. Credit: #PayYourWorkers

The Solidarity Center and the Worker Rights Consortium (WRC) announced today that more than 1,250 Thai workers who sewed bras for Victoria’s Secret, Lane Bryant, and Torrid—and who were fired in 2021 without their legally mandated severance—have received $8.3 million (281 million baht) in compensation. The groups credited the decision of Victoria’s Secret to finance the payments, via a loan arrangement with the workers’ former employer.

Sycamore Partners, the parent of Lane Bryant and Torrid, did not contribute.

“This is a huge victory for the workers and a testament to the courage of their union and the strength of the international solidarity campaign that supported them,” said David Welsh, Thailand country director of the Solidarity Center. “Low-wage garment workers left destitute by injustice meted out by global supply chains is nothing new. What’s new is they did not accept their fate—and won. We also hope this represents a model for the type of domestic, governmental, international and brand engagement to resolve future cases where garment workers are left in similarly desperate straits. It’s an historic case given the amount of the settlement and again, hopefully, a model for the global garment industry going forward in terms of direct brand involvement’.

The workers are represented by the Triumph International Union, affiliated with the Confederation of Industrial Labour of Thailand.

“Our organization has documented hundreds of cases of wage theft in the apparel supply chain,” said Scott Nova, Executive Director of the WRC. “This was the largest theft—and now the most back pay—we’ve ever seen at an individual garment factory. The $8.3 million provided by Victoria’s Secret is also the most any brand has ever contributed to help resolve a wage theft case.”

After the Brilliant Alliance factory closed in March 2021, the Thai government ordered its owner, Hong Kong-based Clover Group, to pay severance within 30 days. Clover refused, telling the factory’s 1,250 low-wage workers it had no money and they should agree to wait 10 years to be paid in full.

With the Solidarity Center’s support and advocacy, the union launched a campaign demanding their severance pay. The WRC and Solidarity Center engaged Victoria’s Secret and Sycamore, pressing them to ensure the workers were paid. The WRC identified other brands that did not use Brilliant Alliance, but had influence over Clover and over a key business partner, Brandix, a Sri Lankan apparel supplier: American Eagle Outfitters, Gap, and PVH. After months of efforts, including campaigning by Clean Clothes Campaign, Remake, and other nonprofit worker advocacy organizations participating in the global #PayYourWorkers coalition, Clover agreed to pay the workers and Victoria’s Secret committed to finance the payments, via a loan to Clover. Last week, all workers received their severance, plus over one million dollars in interest, per Thai law.

Sycamore Partners ignored entreaties and did nothing to support the workers.

“Many of the workers were at the factory for well over a decade and they earned very substantial severance,” said Welsh, noting that the average Brilliant Alliance worker received the equivalent of more than two years’ wages and some received as much as four years’ pay.

“The severance these workers earned was effectively their life’s savings,” said Nova, “stolen from them when they were fired and now restored.” He continued, “Victoria’s Secret should be very proud of what it has done here. The people who run Sycamore Partners should hang their heads in shame.”

The Solidarity Center can arrange worker interviews upon request.