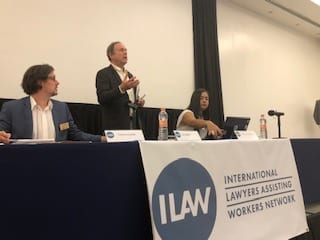 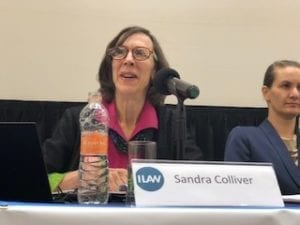 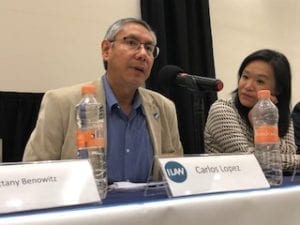 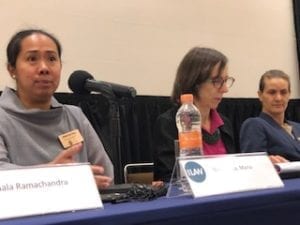 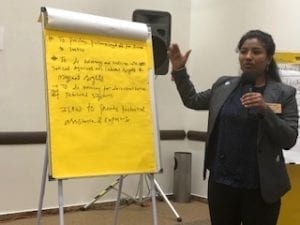 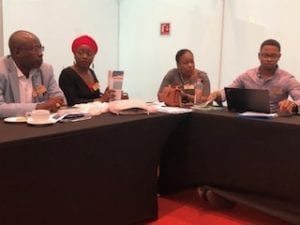 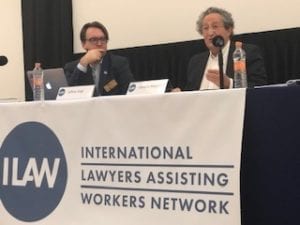 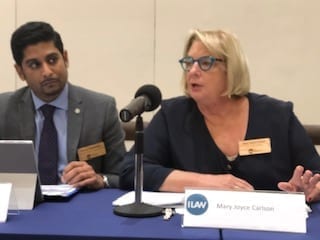 The ability of workers to freely form unions is such a fundamental human right that the United Nations (UN) holds countries accountable for violating those rights, according to Lance Compa, senior lecturer in labor law at Cornell University.

“Even countries that have not ratified ILO 87”—the International Labor Organization standard covering freedom of association—“are subject to it because it’s a basic right under the UN charter,” he said. 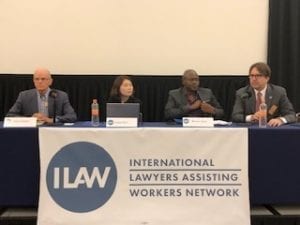 Compa opened the afternoon panel plenary on freedom of association at the International Lawyers Assisting Workers (ILAW) conference in Mexico City, where worker rights lawyers are discussing strategies to facilitate innovative litigation, help spread the adoption of pro-worker legislation and defeat anti-worker laws. The two-day conference in Mexico City brings together more than 100 worker rights lawyers from around the world.

Compa pointed out that the concept of freedom of association is much broader than the ability to form unions, and cited examples of workers in the United States who are exercising those rights through worker associations comprised primarily of migrant workers, walkouts at nonunionized corporations like Google, and the transnational fast food worker fight for better wages.

Benson Upah at the Nigeria Labor Congress and Dayhe Park from the Korea Confederation of Trade Unions joined Compa in leading a wide-ranging discussion with participants who shared concerns about the lack of judicial knowledge of ILO standards on labor rights and the need to educate workers about their rights.

“Unions need to embark on internal governance structural reforms, such as transparency,” Upah said. He also suggested the ILO should assist labor rights advocates in bringing companies to justice for committing offenses in one country and then moving operations to another so they will not face legal action.” 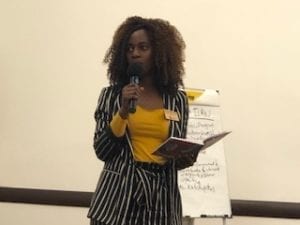 “Capital can move freely, but where does it move?” Where it can pay workers the least, said Maureen Kalume chadi from the Kenya Union of Domestic, Hotels, Educational Institutions, Hospitals and Allied Workers (KUDHEIHA), sharing insights from an earlier roundtable discussion on achieving justice for migrant workers. The roundtable was among six that participants reported on during another afternoon plenary, where they also suggested strategic next steps for ILAW to take in the coming year.

Discussing how migrant workers are excluded from national labor laws and so denied access to justice, and how unscrupulous labor recruitment agencies take advantage of migrant workers, the group also shared success stories from India and Thailand. In Thailand, for instance, worker rights attorneys assisted migrant farm workers from Myanmar in obtaining justice after they were imprisoned for reporting abuses.

Participants in the employment discrimination roundtable shared their discussions on the intersectional concept of discrimination and how religion, ethnicity and other factors are connected with gender discrimination, points that show “the need to bolster our expertise on it, and recognize it from the outset,” said Solidarity Center Senior Gender Specialist Robin Runge.

“Isolating forms of discrimination is not effective,” she said.

The roundtable on discrimination also discussed the extent to which gender inequality is a widespread global issue, and how equal pay is not limited to unequal paychecks between women and men—for example, women may be blocked from securing higher paying jobs.

With the June passage of ILO 190 on ending violence in the workplace and the need for governments to ratify the standard, the group recommended an ILAW forum to enable members to share strategies on its implementation in their countries.

Participants in the “fissured employment relationship” roundtable shared their conversations on the need for a broad definition of worker and employer to address the growing number of “platform” companies like Uber claiming they are not employers and asking for exemptions from labor laws that protect workers.

They also shared successes, including a September victory in Ukraine, where Glovo delivery workers became the first in the country to form a union in the gig economy. The workers, who say they were forced to bike or drive their scooters up to 14 hours per day, six days a week to make a living, won in part by building on a legal judgement in the United Kingdom regulating platform companies.

Participants also reported on their roundtable discussions on the global supply chain, occupational safety and health and the informal economy. 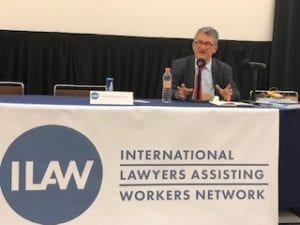 Building on earlier discussions in the conference on Mexico’s recent labor law reforms, Arturo Alcade, a prominent labor lawyer in Mexico, discussed during a lunchtime plenary how worker rights advocates for years championed the reforms now coming to fruition.

By filing complaints with the ILO on labor law violations that put worker rights abuses under international scrutiny and by working across borders with unions to hold corporations like NIKE accountable for worker rights violations, Alcalde says labor law reform “is now becoming institutionalized” in Mexico.