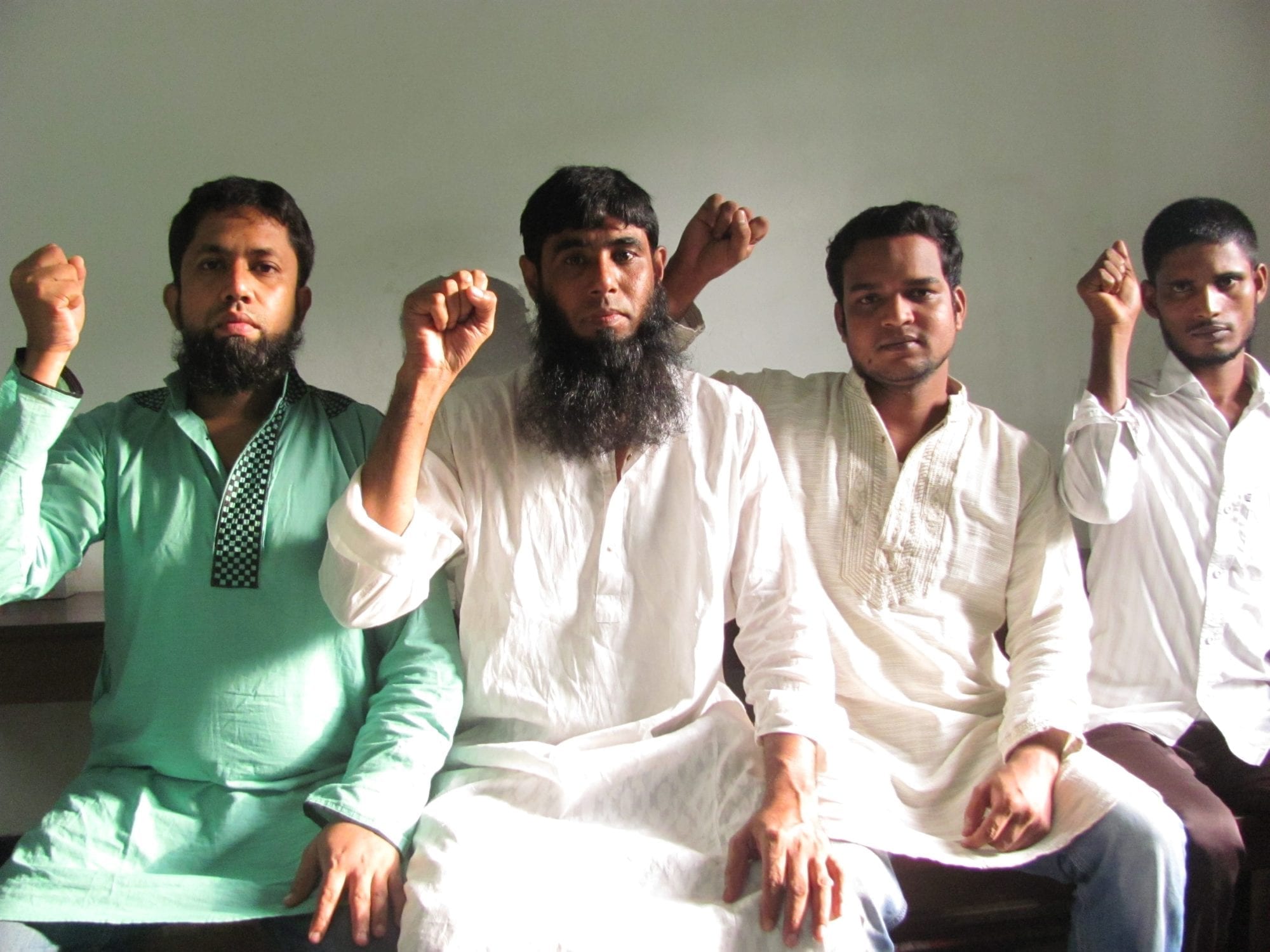 Mehedi Hasan, 35, was among workers helping form the association. When Mehedi began work at the factory, where he was hired to make plastic and polyethlene bags,  he says instead he was asked to perform janitorial duties.

“That disappoints me a lot. Though I was appointed as a factory worker, I was asked to clean the factory. There were other problems as well,” he says.

“From that day, I promised to myself that I would work for a change in the factory,” Mehedi added.

Staying Strong to Form Their Association
Mehedi joined with Dalim Sarkar, 30, Russel Sarkar, 28, and Mohammad Alamin, 25, and other workers to form a Workers’ Welfare Association to represent the 100 workers in the factory, formerly called Ju Hyung Co. Ltd.

“The initial stage (involved much) struggling,” says Dalim Sarkar, association secretary. “We had to work hard to convince other workers about the benefit of a (Workers’ Welfare Association).”

“We are now getting increased money for our meal and transportation,” said Alamin.

Garment worker Russel Sarkar said that under the agreement, workers also will receive paid leave for the first time. Some workers have begun to receive performance promotions, a practice the company had ended.

Associations are permitted to represent workers in disputes and grievances, negotiate collective bargaining contracts and collect membership dues, but cannot affiliate with labor unions, nongovernmental organizations or political organizations outside of the EPZ.

“Now other factories in the EPZs are inspired by us,” Dalim says. “If there is a federation in EPZ, our fight for workers’ rights will be easier,” he added.

Workers Associations Spreading
Despite obstacles, more workers are forming associations in factories throughout Bangladesh’s export processing zones. Associations now represent workers at 53 of the 102 factories in the Dhaka EPZ alone.

Bangladesh derives 20 percent of its income from exports created in the EPZs, which are industrial areas that offer special incentives to foreign investors like low taxes, lax environmental regulations and low labor costs. Some 405,166 workers, the vast majority of them women, work in 437 factories in Bangladesh’s eight EPZs. 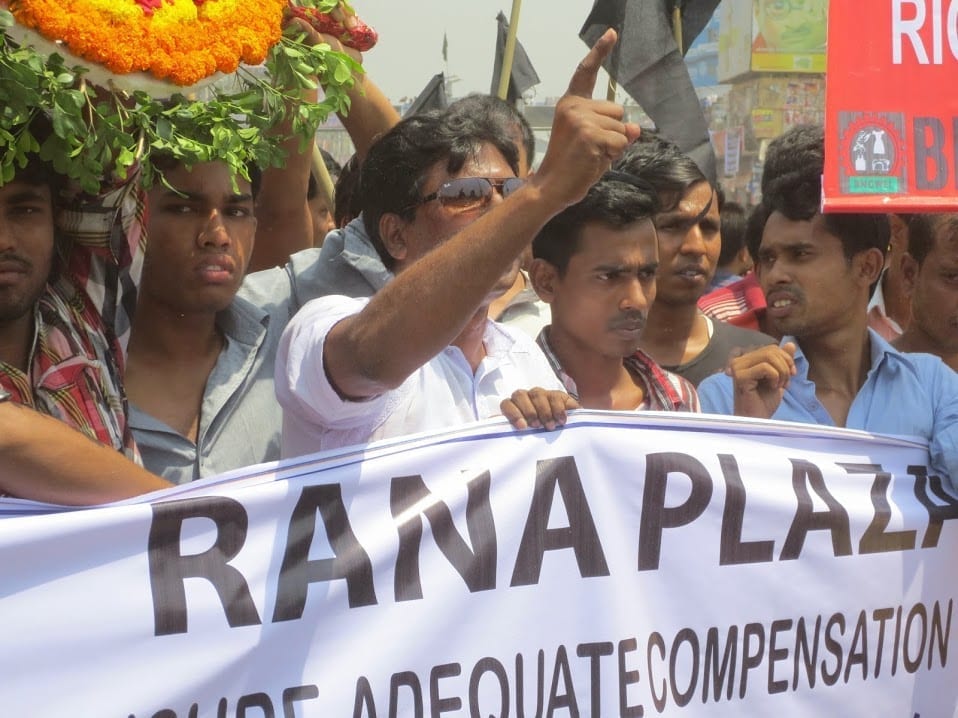 Paying with Their Lives: The High Cost of Cheap Clothing

Last weekend, more than 110 garment workers died in a fire that burned the Tazreen Fashion Ltd. garment factory, located in the outskirts of Bangladesh’s capital, Dhaka.  Women and men working overtime on the production lines—located on the second and third floors of the building—were trapped when fire broke out in the first-floor warehouse. With no fire escapes, the only exits were stairs leading to the first floor, where the fire raged. Workers scrambled toward the roof, jumped from upper floors, or were trampled by their panic-stricken co-workers. Some could not run fast enough and were lost to the flames and smoke.

The grieving aunt of one of the workers told the Solidarity Center’s Program Officer Rukshana Arzoo, “My nephew called his mother and said, ‘I will die as I will jump from the fourth floor. Please come and get my body’.”

According to news reports, Tazreen Fashion earns $36 million a year supplying garments to major buyers in the West. Before the embers had cooled, the company’s management promised to pay 100,000 taka (about $1,235), to families of the workers who perished. While this is the legal compensation rate for a worker killed on the job, it is a mere pittance to a multimillion-dollar exporter. And it raises a serious question: Is the life of a Bangladeshi garment worker worth only $1,235?

In Bangladesh’s garment factories—and in others around Asia—the relentless drive for cheap production often entails dangerous facilities, below-poverty wages, cramped conditions and an absence of health and safety programs. And it is the workers who pay. ABC News has best summed up the situation: “Bangladesh has become a favorite of many American retailers, drawn by the cheapest labor in the world, as low as 21 cents an hour, producing clothes in crowded conditions that would be illegal in the U.S. In the past five years, more than 700 Bangladeshi garment workers have died in factory fires.”

The trend is alarming. And instead of making real commitments to listening to workers, ensuring that they can organize to address concerns, building better factories and implementing programs to ensure the safety of the women and men whose labor generates enormous sums for business owners and the country, the garment industry has offered nebulous conspiracy theories for the Tazreen and other fires.

Yet, according to the Associated Press, “Authorities have formed three committees to look into the incident. An industry group has suggested that sabotage may be to blame, though fire officials have said it was not the fire itself, but the poor safety measures that caused the high death toll.”

No matter how the fire started, the factory was a death trap and its management must answer for the lives lost on its watch.

The Solidarity Center has been supporting workers’ rights—including providing fire safety training—in Bangladesh for years. We know from experience that in low-wage economies in general, companies find little reason to protect the rights and interests of workers—and that corporate self-regulation has proven a faulty tool for ensuring healthy and dignified workplaces. Meanwhile, vulnerable and impoverished workers cannot fight alone for their rights and, without the relative strength of a union to represent them, their lives hang in the balance.

So what has to happen to keep blood off Bangladesh-made clothes sold in Western stores? In the immediate term, the government of Bangladesh and the garment industry must pursue a transparent and serious investigation into the deadly Tazreen fire, prosecute those responsible, provide just compensation for the families of the dead and injured, and implement a serious and comprehensive fire safety and monitoring program.

But if authorities and buyers are serious about preventing a greater death toll, workers—whose lives are at risk and who know best how dangerous their workplace can be—must be able to assert their rights, organize unions with their co-workers, raise safety concerns and demand better working conditions according to their best judgment.

As eminent economist Debapriya Bhattacharya told Bangladesh’s Daily News this week, “Trade unions should be allowed since other institutions seem to have failed to protect the workers’ safety and interests… Otherwise, this type of incident will occur again and again.”

U.S. Ambassador to Bangladesh Dan Mozena warned garment industry leaders in Dhaka that recent developments in the ready-made garment industry, including the unsolved murder of union activist Aminul Islam, could coalesce into “a perfect storm that could threaten the Bangladesh brand” in the United States.

“Although this murder has elicited little attention or interest in Bangladesh, that is not the case in the United States, where worker rights supporters have seized on this issue, highlighting it as a major escalation in the erosion of worker rights in Bangladesh,” Mozena told executives of the Bangladesh Garment Manufacturers Export Association at a meeting on Wednesday. His remarks came only weeks after a town meeting in Dhaka at which Secretary of State Hillary Rodham Clinton fielded a question about the murder of Islam, a longtime friend of the Solidarity Center.

Mozena also cited other concerns by major U.S. brands that could have a negative impact on the garment industry. He described how the CEO of one of Bangladesh’s major buyers had called him at midnight to express concern about critical reports on such issues as the recent spate of fires in garment factories. The fires result from lack of labor organization, he said the CEO told him, as union workers do not accept dangerous health and safety conditions in the workplace.

“Bangladeshi activists who monitor labor in the RMG sector tell me that workers are becoming increasingly restive,” Mozena continued, “due mainly to the growing failure of wages to keep up with the rising cost of living and the increasing vulnerability labor leaders feel as a result of the murder of Aminul Islam and harassment of other labor activists.”

Mozena stressed that the BGMEA had the power to overcome these hazards and make Bangladesh the next “Asian tiger.” But he made it clear that failing to address them presented a potential threat to Bangladesh’s economic well-being.