Unions Are Unique in Their Ability to Help End Corruption 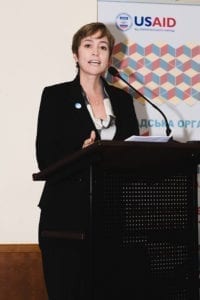 “Trade unions are uniquely situated to help in the struggle against corruption and to help average citizens see the changes they want to see—and to really believe in,” says Bader-Blau.

“Where independent trade unions function, there is a grassroots actor pushing for transparency and accountability, checking the abuses that emerge from monopolies of power among a small elite,” she said.

The conference sought to bring together Ukrainian trade unions and labor advocates to deepen their focus on anti-corruption, offer encouragement and provide networking opportunities in the struggle against abuse of the public’s trust.

“Workers are best situated to report corruption,” said Solidarity Center Country Program Director for Ukraine Tristan Masat. “If the media and public are going to discover corruption, they almost always do so from an insider. Workers have the inside information, and they need to be protected so that that can refuse to participate in corruption and can report corruption with less fear of retaliation,” he said.

Workers Are Well-Placed to Report Corruption

Transparency International-Ukraine Lawyer Dmytro Kuzin agreed, adding, “Workers know corruption but seldom speak out because they are afraid of retaliation. Employers find minor work violations to use as an excuse to fire workers who speak out.”

Mykhailo Volynets, president of the Confederation of Free Trade Unions of Ukraine, said, “Failure to pay salaries in public enterprises is corruption. The money is budgeted, but workers in coal mines are not getting paid. Why not? Where is the money going?

Women workers in particular bear the brunt of corruption, said Bader-Blau. “There is a pay gap in Ukraine for equal work. So when women are making 30 percent less than men for equal work, the effect of having to pay bribes or deal with graft is more extreme for women.”

Mykhailo Chaplyga, human rights commissioner from the Office of Ukraine Parliament, said, “It would be great for us to partner with trade unions. They have a deep understanding of what is going on in this system.”

The conference was conducted as part of Solidarity Center’s USAID’s global labor program.