Violence at the Workplace: ‘They Treated Us Like Slaves’

Gender-based violence on the job occurs far more often than most people realize, and domestic workers—isolated in individual homes—are especially vulnerable to abuse, said domestic workers, union organizers and experts Wednesday at a panel discussion focusing on women and violence at work.

“They treated us like slaves,” said May Joy Guarizo Salapare, describing her experience as a domestic worker for a family in Saudi Arabia.

When Guarizo arrived in Saudi Arabia from the Philippines, her employer refused for months to let her call her family to let them know she was safe or to contact the labor recruiting agency that arranged her job. Meanwhile, Guarizo and another domestic worker from the Philippines worked every day from 6 a.m. until midnight, when the employer locked them in their room. The employer’s son continually tried to corner Guarizo in the pantry and other areas where he could assault her.

After Guarizo finally managed to contact the labor agency, she was sent home with no money. Only through the kindness of passengers on the plane, could she pay for a taxi from the airport.

Guarizo—one of the panelists at the Gender-Based Violence in the Workplace discussion held at the Solidarity Center in Washington, D.C.—says she is working to ensure that others do not endure the treatment she suffered, conditions all too common for the world’s 52 million domestic workers, most of whom are women. Today she is a member of the Domestic Workers’ Network in Jordan and the United Filipino Workers Association in Jordan.

Guarizo was joined on the panel by Sehamin Irene Dominique Flora Tieu To, an Ivory Coast native and active member of the Coalition of Migrant Workers in Morocco; Bama Athreya, senior specialist for Labor and Employment Rights at the U.S. Agency for International Development (USAID); and Robin Runge, a U.S.-based attorney who specializes in gender-based violence. Lisa McGowan, Solidarity Center senior specialist for gender equality, moderated.

Addressing violence directed at domestic workers is particularly difficult, panelists said, because women are reluctant to come forward for many reasons—including loss of employment, risk of further abuse by the employer or labor recruiter and culturally driven shame about discussing such details in public.

Tieu To, who as a domestic worker was trapped in her employer’s house in Morocco after he took her passport, described herself as “one of the lucky ones.” She was forced to sleep in a room that was a “glorified closet” and was not paid after the first two months’ work, but left without being physically abused. She is now reaching out to other domestic workers in Morocco to bring them into the Coalition of Migrant Workers, where they have access to legal and medical assistance, and hopes to expand the group’s outreach to Moroccan-born domestic workers.

Despite the prevalence of gender-based violence at work, few countries collect such data. “It is shocking how little data we have,” said Athreya. Yet data is essential for changing the prevailing attitude that the problem is limited to a handful of workers, she said.

Speaking from the audience, Marcel Sinzidi Amiyeto, the president of the Collectif des Travailleurs Immigres au Maroc (Coalition of Migrant Workers in Morocco), said it is important to keep in mind how the lack of family-supporting jobs in many countries and economic polices that impoverish people force so many workers to go abroad.

“Sometimes we forget to talk about why people leave their homes,” he said. “Unless we find out how we can solve those root issues, the problems will continue. We must raise awareness in the country of origin.”

Guarizo, Tieu To, Amiyeto, Phobsuk Gasing of the International Domestic Workers Federation and Myrtle Witbooi, general secretary of the South African Domestic Service and Allied Workers Union, participated in a weeklong exchange program in which they met with U.S. domestic workers in California, took part in the United Domestic Workers of America convention in Sacramento and held a roundtable with union organizers at the Solidarity Center in Washington, D.C. All were in the United States as participants on a U.S. Department of State Professional Fellows exchange to examine international models for overcoming the obstacles of reaching and organizing domestic and migrant workers. 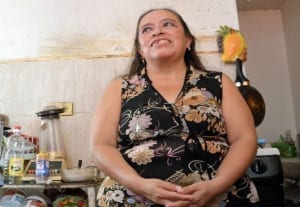 Tonantzin Nava: “As women, we must raise our voices and keep pushing for better opportunities for all of us.”

At an auto parts factory in Piedras Negras, Mexico, women getting off work after midnight board private buses the company pays for to transport them home. But until recently, the bus drivers refused to take the women all the way to their houses, instead letting them off far from their residences and forcing them to walk alone in one of Mexico’s most unsafe areas, especially for women. (El articulo en español aquÍ.)

All that changed after the women joined together and circulated a petition asking their employer to require the bus drivers to take them to their houses, which they now do.

“To me this was important not only because now we can say to our kids that we’ll be back from work safe at night, but also because more women in our neighborhoods will consider working at the factories,” says one worker, Tonantzin Nava. “As women, we must raise our voices and keep pushing for better opportunities for all of us, and to ensure that our jobs provide for our safety.”

The women workers recognized they have the power to stand up for their safety after participating in the Gender and Women’s Empowerment for Action (GEMA) training, a program sponsored by the Solidarity Center and the Border Committee of Women Workers (Comité Fronterizo de Obrer@s, CFO).

Launched in 2013, GEMA (“gemstone” in Spanish), is unique because women workers are at its center. It was designed by and for women workers in the maquilas of Mexico’s northern border, and the workers guide the program facilitators in the types of training, analysis and planning most appropriate and useful for them. GEMA participants tell facilitators they want formal-sector jobs, but with decent working conditions. If maquila jobs—where women predominate—are not decent jobs, they perpetuate gender-based discrimination and violence and do not help families and their communities.

Economic hardship contributes to the daily potential for physical danger, and accentuates the risks that women in particular face. The GEMA program helps women analyze these issues and develop plans of action to address them.

In border areas like Piedras Negras, women make around $1 per hour in the maquiladoras, and most face unsafe and unhealthy conditions in an environment where labor laws are typically not enforced. Chronic injuries such as carpel tunnel and circulation problems from long hours of backbreaking and repetitive work are the norm, yet access to health care and workers’ compensation is sporadic.

Piedras Negras, in Coahuila state, across from Eagle Pass, Texas, is in the heart of northeastern Mexico, where the number of women murdered jumped more than 500 percent between 2001 and 2010. While the cause of these deaths varies, the deterioration of the social fabric, which has enabled such violence to surge unimpeded, stems in large part from the economic marginalization of women and their families.

Across Mexico, some 4,000 women disappeared in 2011–2012, part of a pandemic of violence against women at a time when 10 million workers were unable to provide the basic needs of their families, and when the number of women entering precarious jobs grew faster than the rate at which they were entering well-paid formal sector jobs.

To reach and empower as many women as possible, GEMA participants go on to share their insights and training with other women, meeting with them in their homes, where these “safe” environments provide them the social space to get to know one another and develop bonds of solidarity, figure out their most pressing problems and devise courses of action to address them. The women say GEMA gives them the tools to rebuild the social fabric of their communities.

“In GEMA, we have developed our self-confidence as well as skills and talents that we didn´t even know we had,” says Yohanna Esparza. “I am now facilitating discussion groups with other women and we are starting to walk steadfastly together, with our heads held high, on the path toward our dreams of a better future.”

Other women who have taken part in GEMA have gone on to participate in weekly roundtable meetings with management at an auto parts factory, to channel concerns and develop solutions.

GEMA is now expanding its reach. In 2014, the CFO and Solidarity Center began jointly facilitating a women’s empowerment and leadership program for women mineworkers with the National Union of Mine, Metal, Steel and Similar Workers of the Mexican Republic (SNTMMSSRM) and United Steelworkers. The union leadership is unanimous in declaring that when women are strong, and make their voices heard, unions are strong and everyone benefits from improved living and working conditions—workers, employers and society. 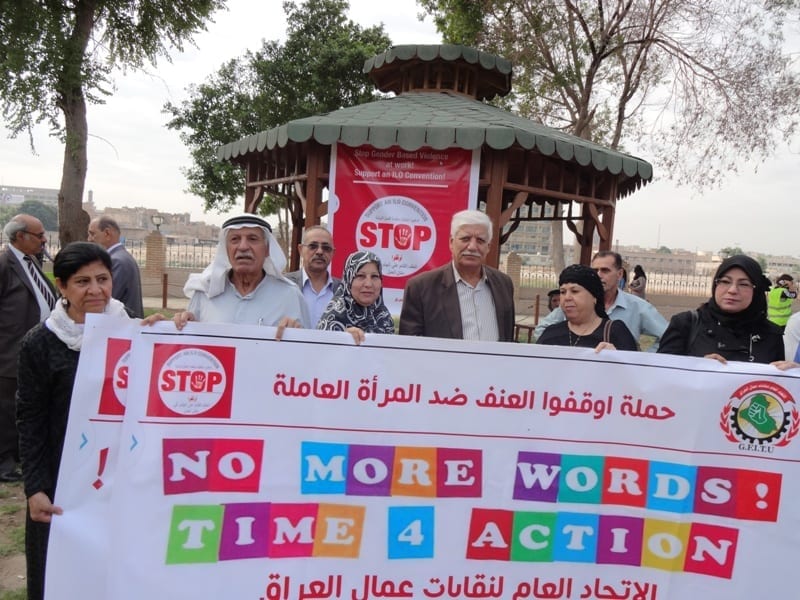