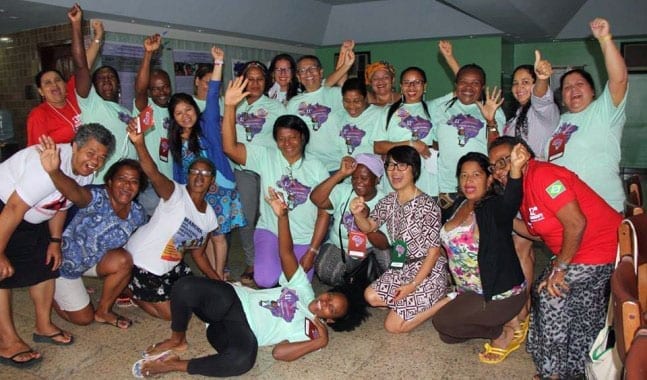 Following years of campaigning by domestic workers and their allies across Brazil, the government in recent days ratified the International Labor Organization Domestic Workers Convention (No. 189), a binding standard in which domestic workers are entitled to full labor rights, including those covering work hours, overtime pay, safety and health standards and paid leave. Brazil is the twenty-fifth country to ratify Convention 189 and the fourteenth in the Americas region.

Since the ILO passed the convention in 2011, the National Federation of Domestic Workers (FENATRAD), the National Confederation of Retail and Service Workers (CONTRACS) and the Central Union of Workers (CUT) were among unions pushing for its ratification, ultimately securing 1.2 million signatures urging the government to ratify the measure.

In a statement celebrating ratification, FENATRAD also vows to continue in the “daily struggle for dignity, valorization and recognition of domestic work, work that moves and creates conditions for other workers to dedicate themselves to productive activities.”

The majority of the 7 million domestic workers in Brazil are women, primarily indigenous people and Afro-Brazilians. Brazil’s slumping economy has seen a sharp increase of workers in the informal-sector jobs, with 121,000 domestic worker jobs created between December 2014 and April 2017. At the same time, more than 3.2 million jobs were lost in the formal private sector and some 600,000 jobs lost in the public sector, according to the Department of Statistics and Socioeconomic Studies in Brazil (DIEESE).

Further, more than 9 million people have been pushed below the poverty line since 2015 and 800,000 Brazilians entered the ranks of the unemployed between January and August 2017.

Although workers are celebrating passage of the Domestic Workers Convention, they say a labor reform law passed last year severely weakens their fundamental rights on the job. The law in part dismantles provisions on overtime pay and working hours; creates new forms of precarious contracting, such as “zero-hour” contracts that do not guarantee a minimum wage; and permits pregnant women and breastfeeding mothers to work in unhealthy environments.

The law also disproportionately impacts historically disadvantaged workers, such as women and Afro-Brazilians, who earn less and are much more likely to be unemployed or underemployed than their white male counterparts.

“The convention is to guarantee decent work, unlike the new law that removes basic rights of the worker and the worker,” says Myllena Calazans, a lawyer with FENATRAD.

With Solidarity Center support, FENATRAD recently registered as a national federation, became a member of the International Domestic Workers Federation (IDWF) and is connecting with regional domestic worker organizations.

As part of our year in review series, we are highlighting the 12 most popular Solidarity Center web stories of 2017. This story received the most reach on our Facebook page in July. Read the full story here.

Year in Review: Union Women Leaders in the Forefront

As part of our year in review series, we are highlighting the 12 most popular Solidarity Center web stories of 2017. This story received the most reach on our Facebook page in October. Read the full story here.

So Omamo took action. She demanded her employer provide breastfeeding accommodations for women workers and such fundamental workplace amenities as sanitary receptacles in the restrooms. Soon, she was elected union shop floor leader, and after winning a series of increasingly high positions, now holds the highest office, general secretary, in the 11,000-member national Metal Workers union. Omamo also is national chair of the Congress of Trade Unions–Kenya (COTU-K) Women’s Committee and serves on the COTU-K executive board.

Her male co-workers saw “I could fight for the men, and they put their trust in me,” she says. 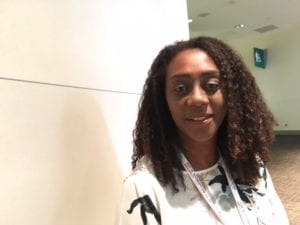 Women, race and youth are all crosscutting issues about workers who are most oppressed.—Rosana Fernandes, Brazil CUT. Credit: Solidarity Center/Tula Connell

Halfway across the globe in Brazil, Rosana Fernandes began working at age 22 at a plastics product factory in São Paulo, where she quickly ran for leadership in her factory union and soon was elected to a top-level position at the national Central Union of Workers (CUT). There, she created the Collective of Chemical Youth Workers section to advance the interests of young workers in her industry.

Now deputy secretary of CUT’s Secretariat of Combating Racism, Fernandes says the issues she has worked on as a union leader—women, race and youth—are all “crosscutting policies about workers who are most oppressed.”

Omamo and Fernandes are two of a 20-member Solidarity Center Exchange Program delegation of women union leaders from Kenya and Brazil here in St. Louis for the AFL-CIO 2017 Convention. While in St. Louis, the group will meet with Mayor Lyda Krewson, the city’s first female mayor, and will travel to Atlanta, where they will explore with leaders from U.S. unions and nonprofits their strategies for empowering women within their organizations.

On the Frontlines for Vulnerable Workers

“Most of labor move leadership is male dominated,” Omamo says. “What I have come to realize, personally, is that the biggest challenge has been, ‘How can a male trust a woman to lead them?’”

When Omamo ran for national office in April 2016, her slate included two other women, who ran for treasurer and assistant treasurer. Both were elected. “Now we have shop stewards in unions and branch officials and national officials” who are women, she says.

From the national union level, Fernandes has advocated for broader and deeper inclusion of young workers. “We must effectively incorporate youth into policies in way that renews the union movement,” Fernandes says, speaking through a translator. “Society is constantly changing itself and unions need to keep up. We need policies that are not just for youth but with youth.”

In her 17 months as general secretary of the Metal Workers union, Omamo has initiated trainings across the union’s 11 branches in dispute resolution, labor law, grievance handling and collective bargaining negotiating. The workers, many of whom are illiterate, are now effectively negotiating collective bargaining agreements for the first time without national union participation.

In Brazil, where Afro-Brazilian workers are disproportionately paid less and work in the most dangerous jobs with little job security, Fernandes is now focused on creating fair playing fields for racially disadvantaged workers.

“It’s very clear racial equality is not alive in labor market,” Fernandes says. For instance, the country’s 8 million domestic workers are overwhelming Afro-Brazilian, “a legacy from slavery that work in the home should be automatically done by black women who don’t deserve to have decent wages or (decent) working conditions,” she says. “It’s 2017, and we’re still fighting for fundamental rights for domestic workers.”

For both women leaders, global solidarity is essential to address the common struggles in their countries and around the world.

“It’s also time for us to unite together to fight together to work together in solidarity and to say we want to change the world of work so that the work that will be done by our members will be decent and not precarious,” says Omamo.

And like all the women on the Solidarity Center delegation, Omamo is ready for the challenge.

As she puts it: “I don’t believe in failing, I believe in achieving.”

The law, which President Michel Temer supports and is expected to sign, will remove all restrictions on outsourcing, dismantle labor rights, including provisions on vacations, overtime and working hours, give more freedom to employers to negotiate individually with workers rather than collectively through unions, and eliminate the “union tax” paid by all formal-sector workers, which is the principal form of financing for union activities in Brazil.

Workers across Brazil rallied over the past weeks to urge lawmakers to vote against the so-called labor law reform bill, which will mean “lay-offs, end of formal employment and legalization of freelancers,” says Central Union of Workers (CUT) President Vagner Freitas.

“The problem already begins with the name, the lie that there is around [it],” Sérgio Nobre, secretary-general of CUT told thousands of metalworkers gathered in São Paulo on Tuesday. “‘Reform’ gives the impression that it is a good thing.” Nobre said the law would serve the interests of large multinational companies, not workers.

Workers across Brazil launched a 24-hour general strike in April, after the lower house approved the bill. Brazil’s Congress debated the law without the participation of CUT or any trade union opposed to its provisions, says Nobre.

Young people, specifically young black workers, will be especially harmed, because young workers are primarily employed in precarious jobs and are the majority of the unemployed, Julia Reis Nogueira, CUT national secretary of racial equality said in May.

Senators opposed to the bill tried to block the vote with a sit-in at the Senate president’s rostrum, but the session resumed after a six-hour delay and lawmakers passed the law by 50-26.

Temer was indicted in the Supreme Court in June by the independent public prosecutors’ office, and on Monday, a congressman leading a lower house committee on the president’s alleged corruption called on lawmakers to allow Brazil’s top court to try the case.