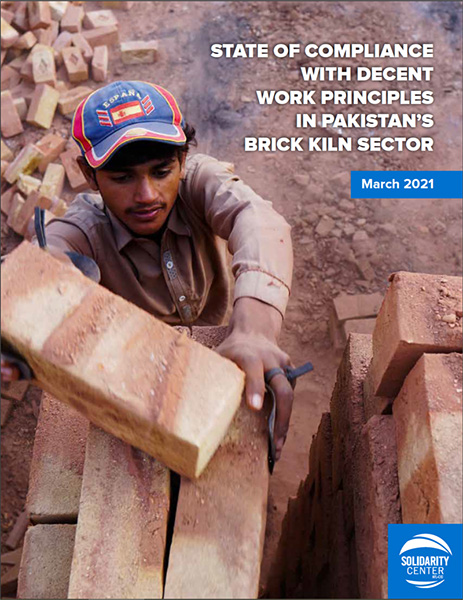 One of Pakistan’s most profitable sectors is also among its most prone to debt bondage, a form of forced labor considered to be modern slavery. While many administrative, legal, policy and social roadblocks prevent the up to 3 million brick kiln workers and their families from escaping debt bondage, solutions exist to end the practice, according to a new Solidarity Center report.

The third-largest producer of bricks in South Asia, Pakistan’s brick sector employs 4.5 million people producing 45 billion bricks per year in 20,000 brick kilns. Although bonded labor was outlawed in Pakistan decades ago, the practice has continued and is likely expanding during the COVID-19 economic crisis.

Bonded labor flourishes in Pakistan and other South Asian countries, particularly in agriculture and brick kilns. Vulnerable workers become bonded laborers by taking loans from their employer and being forced to work to repay the debt. Because their wages are so low, workers rarely make enough to subsist much less clear the loan, and a crisis, such as an injury or health issue, can contribute to vicious cycle of debt. Meanwhile, entire families, including children, may be pressed into work.

The risk of injury and illness for brick kiln workers is high due to adverse living and working conditions, unhygienic water and sanitation, lack of health coverage and adverse occupational health outcomes through exposure to toxic fumes and carbon particulates.

Although focus group interviews revealed a common understanding that workers do indeed suffer poor working conditions and unlivable wages, most also highlighted multiple roadblocks to improving these conditions. These included: Lack of social security for workers, unregulated kilns, weak labor inspection, non-functional district vigilance committees, lax implementation of regulations and no specific law for the brick kiln sector. Other significant issues mentioned include a lack of safety equipment and medical coverage. In addition, women workers reported not receiving their wages because brick kiln owners traditionally pay their wages directly to male members of their family.

To overcome documented roadblocks, the report presents the following recommendations: