Pakistan Journalists ‘Step It Up for Gender Equality’

Gender-based violence at the workplace takes many forms—and for journalists, such abuse can mean sexual harassment at the office or assault in the field where they report stories.

In Pakistan, journalists and media professionals are learning how to prevent and address gender-based violence as part of Solidarity Center-sponsored trainings designed to assist media professionals in achieving gender equality at the workplace and in the stories they report.

“Journalists in Khyber Pakhtunkwa (in northwest Pakistan) are facing a lot of problems and specially female journalists face many issues in the field as well as in their offices,” says Samina Naz, a workshop participant and reporter at Radio Pakistan.

Harassment at the Workplace: Physical and Online
Launched in October, the ongoing Gender Equity and Physical Safety series has involved dozens of journalists and media professionals, many of whom are members of the Pakistan Federal Union of Journalists (PFUJ) or the All Pakistan Newspaper Employees Confederation (APNEC). Participants learn about the range of issues involved in gender equality, identify priority gender equality issues at their workplaces and in their unions, and outline strategies for addressing the issues. 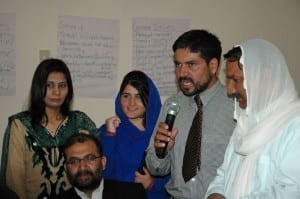 The Solidarity Center is among many unions and other civil society organizations worldwide calling for the International Labor Organization to establish a standard covering gender-based violence at the workplace, an action that moved forward last fall when the ILO announced that a debate for the convention will be on its 2018 agenda.

Women Journalists Paid Less, Lack Job Security
Although the number of women in journalism has grown along with the explosion of media professionals since 2002, when Pakistan legalized private media ownership, they are far more likely than men to experience job precariousness and harassment on the job, and generally are paid less than men for performing the same job. 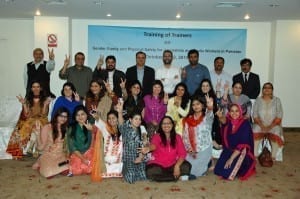 Some 39 percent of women journalists surveyed said they are working without a contract, making it far more difficult for them to seek redress for job-related issues like pay discrimination. Further, more than one third said they were paid less than their male counterparts, and 80 percent said they were not paid for working overtime.

Promoting the work and advancing the role of women in the news media across the globe is critical to transparency and the diversity of voices, and workshop participants plan to expand upon what they learned in part by training other workers, assisted with a train-the-trainer manual the Solidarity Center developed with IFJ. In a post-training survey, all participants also indicated they would ask for a gender policy at work, and a mechanism to address sexual harassment.

“Me and my affiliates have learned a lot from this training and will try to replicate the contents to the best of our knowledge and abilities,” said Syed Ikram Bukhari, APNEC secretary general who works at Group Editor Daily Janch.

As International Women’s Day spotlights “Planet 50-50 by 2030: Step It Up for Gender Equality” to build momentum for the effective implementation of the United Nations’s new Sustainable Development Goals, Pakistan journalists already are stepping it up for gender equality, women’s empowerment and women’s human rights.