More than a thousand local union leaders and activists from across Ukraine met today to plan an emergency mobilization to protest draft labor law amendments that would enable employers to fire workers based on any reason, undermining anti-discrimination protections; allow employers to unilaterally terminate employment contracts and set contracts with unfixed work schedules; and drastically reduce overtime pay from a 100 percent to 20 percent premium, in violation of international labor law. A set of proposed amendments to labor and trade union laws would gut legal protection for unions and see the state unilaterally seize union property. 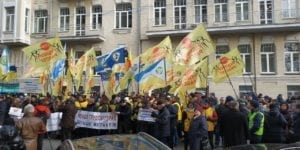 “These laws are a disaster. They undermine the welfare of average Ukrainians, and are little more than a New Year’s gift to oligarchs and corruption,” says Inna Kudinska, a legal expert with Labor Initiatives, a Solidarity Center-supported Ukrainian NGO that provides legal assistance to workers. “Honest business and foreign investment won’t benefit, but average people will suffer.”

Workers have waged protests against the proposed laws for weeks, blocking roads in three towns in the Luhansk region and joining online flashmobs with the hashtags #МолодьПРОТИрабства (youth against slavery) and #НіРабськимЗаконам (no to slave laws).

“The 98 articles of the governmental proposed law, “On Labor,” written by the Ministry of Economy as well as the new trade union law, were drafted without consultation with social partners and expert community,” the global union Building and Wood Workers International (BWI) says in a statement. “The law … further violates Rada [Parliament] procedures, as the body is already considering another labor law.”

The International Lawyers Assisting Workers (ILAW) network sent a letter to Ukraine Prime Minister Olexii Hohcharuk and other top officials detailing reasons the government must withdraw the proposed amendments—including violation of the Ukraine Constitution—and urging it to consult with unions to ensure any future labor law changes are consistent with International Labor Organization (ILO) regulations that Ukraine has signed.

“There appears to be no possible motivation for these amendments other than to weaken the trade union movement and to eliminate the basic contractual rights of all workers,” wrote ILAW, a project of the Solidarity Center, that includes more than 350 members from more than 50 countries.

“Unions are an integral part of Ukraine’s civil society—they are organic, grassroots-driven activist communities fighting for the well-being of the many,” Labor Initiatives lawyer George Sandul said at today’s emergency union meeting.

“This is why we must resist the adoption of anti-union legislation.”

And even as Ukraine battles widespread corruption, legal experts say the draft labor laws will undermine new anti-corruption whistleblower laws because workers will have no protections from dismissal for reporting corruption.