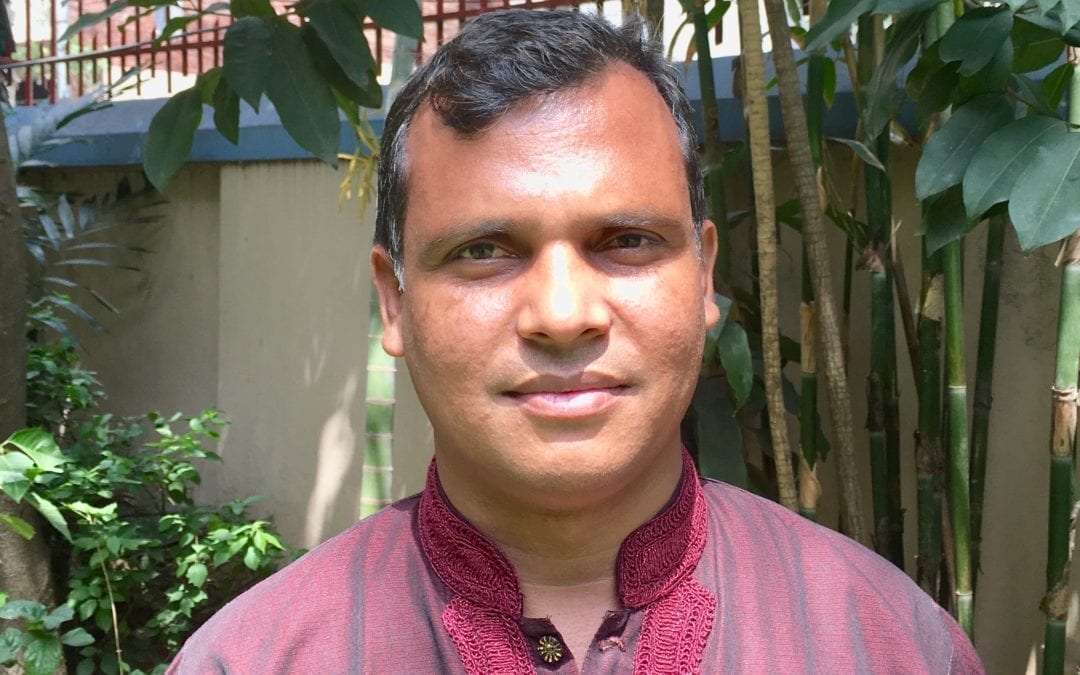 As we approach April 24, the fourth anniversary of the Rana Plaza building collapse in Bangladesh that killed more than 1,130 garment workers and severely injured thousands more, the Solidarity Center is posting first-person stories of three garment worker union organizers who were deeply involved in the aftermath of Rana Plaza and who were arrested in December on baseless and dangerous charges, following wage strikes in the Ashulia garment district.

Asaduzzaman Asad (Asad), a long-time organizer with the Bangladesh Independent Garment Workers Union Federation (BIGUF) that has helped thousands of workers in 36 factories form unions, was one of the more than 35 people arrested in the December crackdown. Police took him from his home on December 22 and later charged him with involvement in a January 2015 political opposition violence case involving a bus burning in which he had no involvement. The case carries punishment of death or up to life imprisonment.

After being denied bail repeatedly, the high court eventually granted Asad bail. He was released on February 27 after spending 68 days in jail. The case is still pending.

“I first got involved with BIGUF around 1994 or 1995. Some of the workers in the garment factory I was working in then would go to BIGUF so I would go with them.“I’m originally from Ranjpur (northern Bangladesh). My father died when I was 13 years old, and our financial condition was so bad that I had to stop my education. When I was around 15, I needed to work so I came to Dhaka, and then when I was around 17 or 18, I started working in a garment factory making 500 taka ($6.16) a month. I was the youngest of eight children. I can still remember before my mother died that she needed 10,000 taka ($125) for a gallbladder operation but I couldn’t arrange it.

“When I used to visit BIGUF office at that time, I would always sing and people loved it. We had a good environment.

“Around 1997 or 1998, Solidarity Center had a two-month internship program (for garment workers) that I participated in. Because I went through the internship program, I was able to begin conducting Friday seminars for other workers on labor law, union organizing, and so on at the BIGUF office.

“I love this work even though I know there’s a lot of risk. I get lots of enjoyment when I work with the people. I put myself in the position of the worker. I see people coming from the villages and they are coming from a very poor background.

Face-to-Face with Death at Rana Plaza
“After the collapse of Rana Plaza, I went to the site and worked there for 14 days. I helped on the medical team and went to the field where the dead bodies were kept. The feelings I had after going to that area cannot be expressed. I did lots of interviews with the workers there and attended some of the meetings when the Solidarity Center filed a legal case about the incident.* When I saw the people grieving, the people mourning, I could not think about myself.

“After Rana Plaza, we began to get union registration, but the hidden obstacles are still there. There are still many attempts to destroy the unions.

Arrested after Garment Worker Strikes
“Arif (another BIGUF organizer) and I live together above the BIGUF office in Gazipur. On December 22, the police came to our room. We told the police we have no work in Ashulia, but they didn’t allow us to talk. They handcuffed us and took us away in their car. They took us to the detective branch office and asked us questions about BIGUF. After a while, the police told us to be quiet while they waited for instructions. On December 24, we were sent to the police station and then from there to the jail. At the jail, we learned about that we were being charged with: a vandalizing case but we not told what type of vandalizing case.

We were confident that we would get bail because we had nothing to do with the case. But we felt bad when we learned we were arrested because (high government officials ordered his arrest). We felt sad about what would happen. If police want to file a false case against us, there’s nothing we can do. Our whole life will be spoiled. We found one person who was charged in the same case as us and he will be in jail for between 10 and 12 years.

If this case doesn’t get dropped against us as soon as possible, it will be a problem. Our names need to be dropped from the charge sheets based on the final police report finding that we don’t have anything to do with this incident. We were not named in the case.

When I was first arrested, I didn’t want to tell my wife. Finally, I called her, but told her not to share with others what happened because rumors would spread quickly. However, people came to know. But my wife also used to work in a garment factory and she was one of us. Naturally, she was sad and she was alone. My sisters cried a lot.

I have been involved with several big campaigns with BIGUF, but when I first came from the village to Dhaka I was nothing. After I did the Solidarity Center internship program, I had the opportunity to be with the people, be with my brothers and sisters. I’ve gone to factories to help workers after fires, I went to Rana Plaza. I’m proud of all these things.

* The Solidarity Center worked with Bangladesh lawyers to file a civil case on behalf of the family of one worker killed in the incident. The first-of-its-kind lawsuit sought just compensation for the irreparable loss of the family’s husband, father and chief breadwinner.